Have you ever thought about the relationship between velocity and pressure? If you think about a fluid being forced through a small orifice you can fairly easily picture the fluid speeding up as it goes through the orifice but did you also know that the surrounding static pressure DECREASES at the point of high velocity?

Energy Vanguard has a great video demonstrating this phenomenon

This lower pressure in a high-velocity fluid (in this case air), also explains entrainment of air into a high-velocity supply air stream that helps mix the air in a room. When the velocity of an air stream is higher, the static pressure around that air stream is lower which draws in air from around that stream (entrains it) and increases the total amount of air being moved in that direction with additional air being drawn in from the sides. 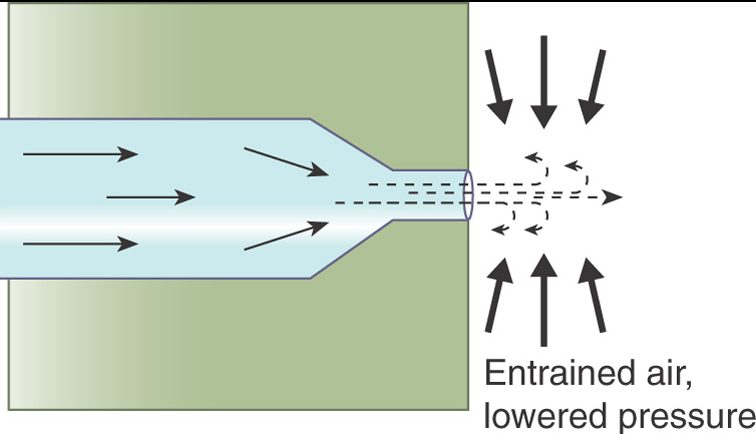 Remember that this effect relies on a directional velocity flow of a stream of fluid (air, water, gas etc..) that is free to flow in the direction of its velocity. As soon as you add in turbulence and containment it isn’t all as clear and we do see that directional motion turns into “static” pressurization like we see inside a duct system or in a refrigerant circuit.  We will most often see this principle at work in it’s pure form in gas burners, flues, and chimneys and at supply duct registers.

Either way, Bernoulli’s Principal is a good thing to be aware of and now that you know about it you may just start to see it at work everywhere.