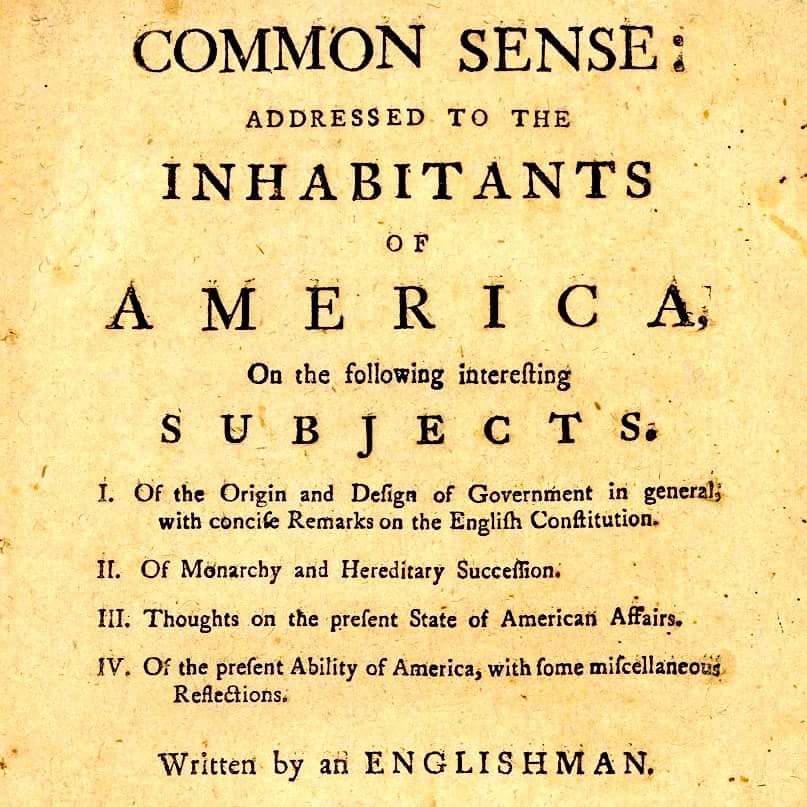 The year was 1774 and a man named Tom traveled the Atlantic from England to visit his friend Ben in Philly. Tom was 37 years old and he had already been through a failed business and lost his wife and child during childbirth.

He was a troublemaker by some accounts a free spirit at the very least, but a man who had seen suffering and was ready to make his mark on the new world and the entire globe in turn.

This man was Thomas Paine and he met Benjamin Franklin in England and was fascinated by the man and his ideas about governance and liberty.

Tom hit Philadelphia in a time where each colony in what would become the USA had different ideas about what the problems were and what to do about it. In 1774 when he arrived, Boston was already on lockdown after the “massacre” and the tea party, but most of the colonies remained loyal to England.

What Paine wrote wasn’t really a “book”, it was just a pamphlet with his ideas of what a new government could look like. It was called “Common Sense” and it spread across the new world like wildfire distributing 500,000 copies all in all at a time when the colonies only had 2 million residents.

In a time when many people still believed in the monarchy as the “divine right of kings”, Tom used simple words and clearly communicated arguments to make ideas that had been discussed in the smoke-filled rooms of the elites accessible to everyone.

His ideas were not new at all, John Locke had been saying many of the same things 100 years earlier but this time the time was right and though Tom wasn’t a writer he was the man for the job and he put in the work to start a revolution.

Common Sense still has the most sales of any American title to date and influences the ideas and actions of many across the world and it was the spark that led to the American Revolution.

Humans are hard-wired to accept things as they are, stick with the status quo, give in to social pressure to conform. If we see something wrong with the world or our trade or our family we often resort to complaining and end off with something like “It is what it is” or “but what are you going to do”. We think we are too weak, our voice is too small, our cause is lost so we stick with what we know and keep our heads down.

I had a friend who used to RAGE about politics non-stop and yet his own children were constantly running into issues and showing him no respect. He had 1000 opinions about what was wrong with the world and yet when speaking about his own daughter he would say “what are you going to do”.

Rather than using ideas to create the change we want to see we are prone to organize ourselves into teams of thought or experience so that we can feel safe or accepted.

Jocks vs. Nerds
White Collar vs. Blue Collar
Republican vs. Democrat
Union vs. Non-Union
One Race vs. Another

If you really care about something finding a team to side with isn’t what’s going to do it.

If you want to see things change you need to learn and share some better ideas that lead to different actions.

There are many of you reading this who care deeply about the trades and the people who work in them. There are some really bad and damaging ideas out there and most of the worst ones don’t have to do with pulling a better vacuum or replacing a capacitor properly. These ideas are deeper and more dangerous and cut to the heart of what it means to be successful in life and in work. Things like –

I’m sure I’ve been guilty of all of these at one point or another but before we can fix it we need to admit that there is a problem. Our trade has a problem with making excuses for bad behavior rather than dealing with it with better ideas.

Thank you to all of you who have already started down this path, for the rest of you I would ask you to stop and think about it. Are we really acting like professionals day in and day out? Are we creating an honorable trade with the way we behave?

I’m thankful that Tom wrote what he did even though it was risky, even though many saw him as a traitor for doing it.