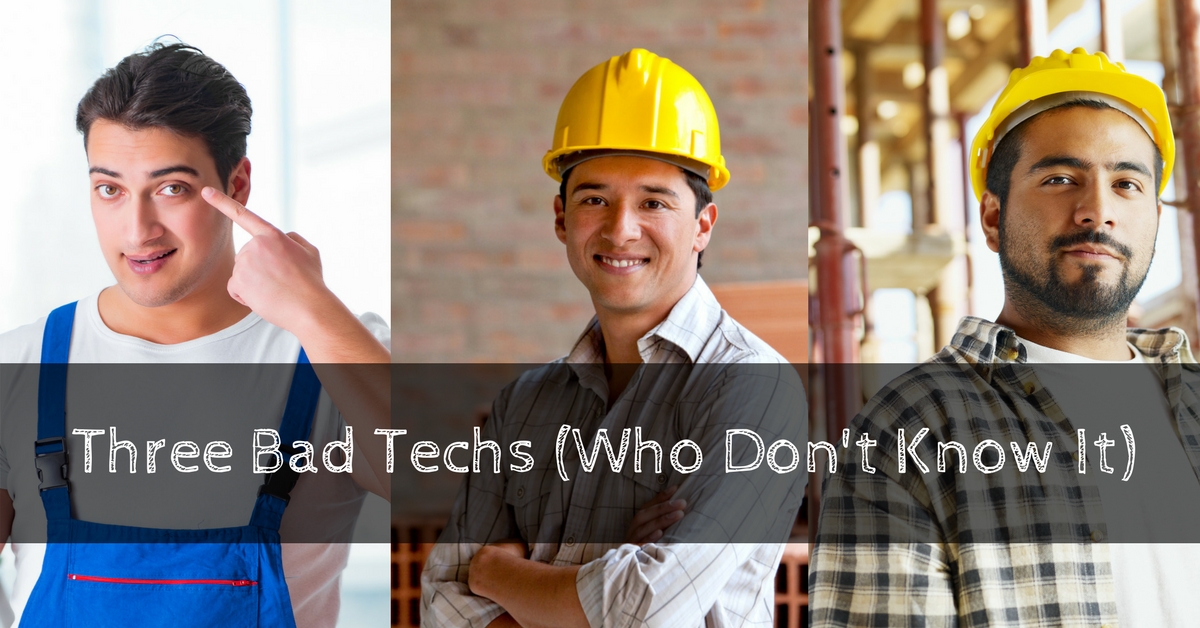 3 Bad Techs That Don’t Know It 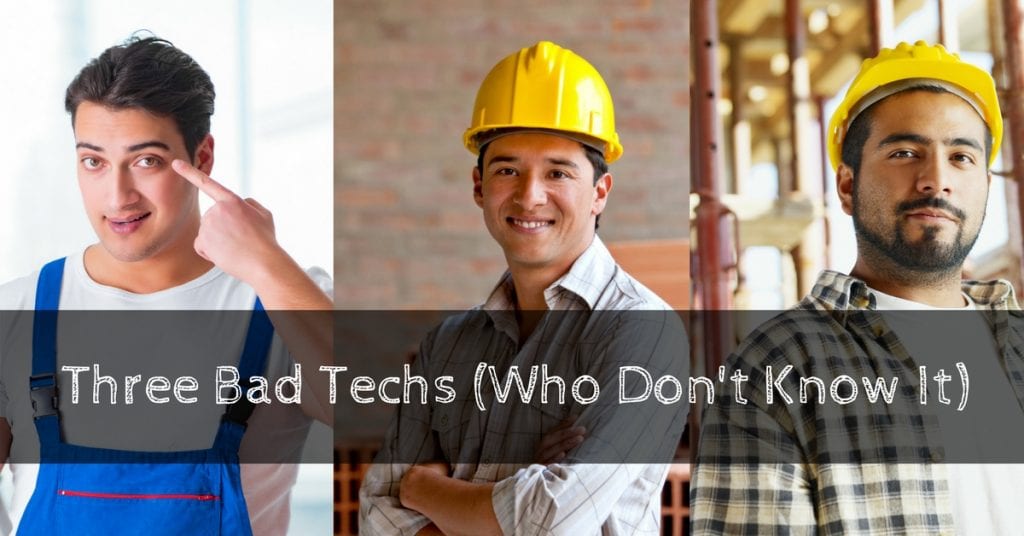 First, let’s state the obvious and clear the air a bit. The photo above is SUPER CHEESY! But this story is about three bad techs who don’t know it so three models clearly posing in clean clothes makes as good of a proxy for a bad tech as anything else.

First off, I’m not being negative about the trade or making fun of people, the point of this story is to identify some traits that many of us may exhibit or see in others techs and it can be hard to identify our own issues or issues within your organization. See if any of these techs sound a LITTLE TOO FAMILIAR and maybe we can learn something. Before you ask… No, these are not real people…. probably… maybe

Randy, like most dramatic people who work in the trades, doesn’t see himself as being dramatic. He just thinks he is being constantly disrespected by management and co-workers and customers are crazy and the dispatcher is out to get him and it’s always about to rain and that ladder (and every ladder) looks unsafe.  These things aren’t DRAMA they are FACTS in Randy’s world and if you question this reality you get added to the long list of people who are disrespecting him.

Randy starts conversations with customers with phrases like “you aren’t going to want to hear this” or “Do you want the good news or the bad news”. He also tends to pass blame to his coworkers or his company because they are just clueless and he knows what’s REALLY going on.

Randy is actually a good tech, but he get’s in a lot of conflicts with coworkers, customers don’t always like his negativity (or as he calls it “being honest”) and he is inefficient and largely unpopular with other techs and management. Randy knows people think poorly of him because everyone is conspiring against him with that blankety-blank dispatcher Donna!

Randy always feels persecuted by the people around him and usually has something negative or conspiratorial to share about every topic. Politics, The weather, customers, co-workers, spouses… you name it.

If you find you are allowing negativity and drama get to you the best practice is to give yourself a break from negative speech. Like your grandma used to say, “If you don’t have anything nice to say”. Negativity is a hard habit to break but the best time to start is now and the best antidote for negativity is gratefulness.

Yes, excuseful is a word… I made it up and I like it.

Bob is confident that he would be able to do his job if he was just given the proper training and tools and enough time to do the job and enough sleep and wasn’t forced to work these ridiculous hours. Bob often wonders if he should go back to school and get his degree in …. something and all the courses he would take if his cheapskate boss would just invest in him.

Sure he was given a book and sent to a seminar last month but that was all THEORY, he is a hands-on learner and he CANNOT learn from books or videos or seminars or anything unless he can get his hands on it.  Once he DOES get his hands on it he can’t be held responsible for any mistakes he makes because he has to be SHOWN what to do and how to do it and if he isn’t SHOWN how can he be held responsible? Now, when he is shown, he is a hands-on learner so he can’t learn things by being shown… he needs to do it himself.

His truck may be a mess but he would clean it if he ever had time with these ridiculous hours but in the slow season that is his one time of the year to relax, you can’t expect him to take his own time during the slow season to clean his van can you?

The best way to stop making excuses is to begin living and working with what old-timers called “grit” or “gumption”. This means doing whatever it takes to solve problems, making excellence a goal and going after it no matter the barriers. Start by reading and learning on your own, don’t wait for someone to show you or tell you, go get it yourself.

Todd knows he is just forgetful, he TRIES to remember to tie down his ladder and put the caps back on and close his back doors on his van but he just forgets sometimes OK!

Sometimes Todd get’s defensive when other techs call him out for leaving the panel off or “forgetting” to clean the drain, but usually Todd just apologizes and says he will do better next time, but he knows he won’t because he didn’t do it on purpose, it just …… happened.

Some of the “Grouchy” old techs have told him that doesn’t seem to care about his job, but they are WRONG! (in Todd’s mind) he does care, he just has other things going on in his life and in his mind and sometimes accidents happen… like the time he stepped through the attic ceiling, or the time he slipped on the ladder, and that one time he rear-ended that car in the parking lot… oops

We have entered a new era of carelessness due to the advent of smartphones, social media, and texting. Many of us find our minds constantly distracted by things other than work during the work day and it leads to poor outcomes, mistakes and safety hazards. everything from climbing a ladder, to driving, to filling out a service call requires ATTENTION and distraction can lead to costly and dangerous mistakes. The best advice is to put the distractions way during the work day… unless it is reading this article. Just remember to put the panels back on and run test the equipment when you are done.