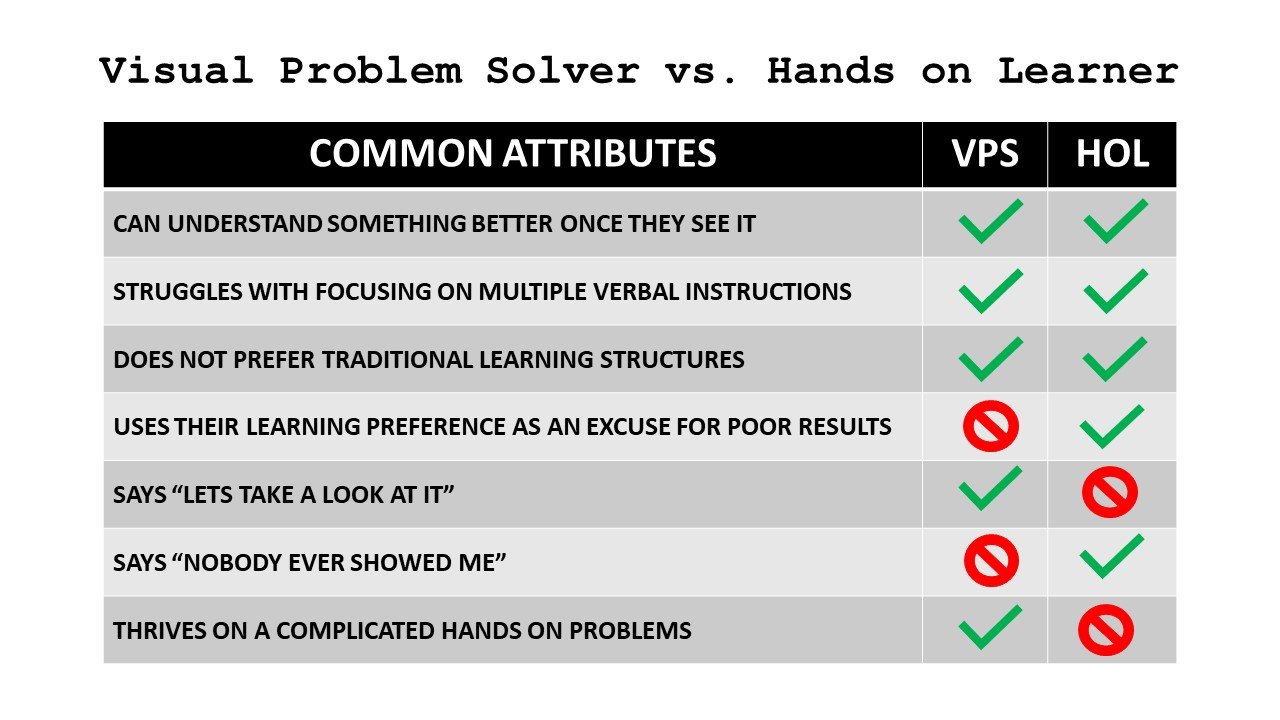 The Hands On Learner Vs. The Visual Problem Solver

Let’s get something out of the way right off the top. Saying that we learn best “hands-on” is sorta like saying we prefer to breathe air…

WE ALL NEED TO APPLY THINGS TO LEARN THEM DEEPLY

David Sandler wrote the book “You can’t teach a kid to ride a bike in a seminar” and the same is certainly true for the trades.

But there is a distinction that needs to be made between “learning to ride a bike in a seminar” and “learning more about bikes in a seminar” or “learning about better riding technique in a seminar”  because these both could be valuable once you’ve already been riding a while.

This article is about HVAC training, but it’s also about things I’ve learned running a business, being homeschooled myself and home educating our kids as well as having a large family.

This is the perspective of one man so take it with a grain of salt.

I’m more of a hands-on learner

Inevitably when I teach a class, or give a seminar, or send an article or make a video or podcast or suggest that someone RTFM… there is someone who says some version of “I’m more of a hands-on learner”

Which… to be clear… is totally cool and should never be disregarded especially when learning an entirely new concept. 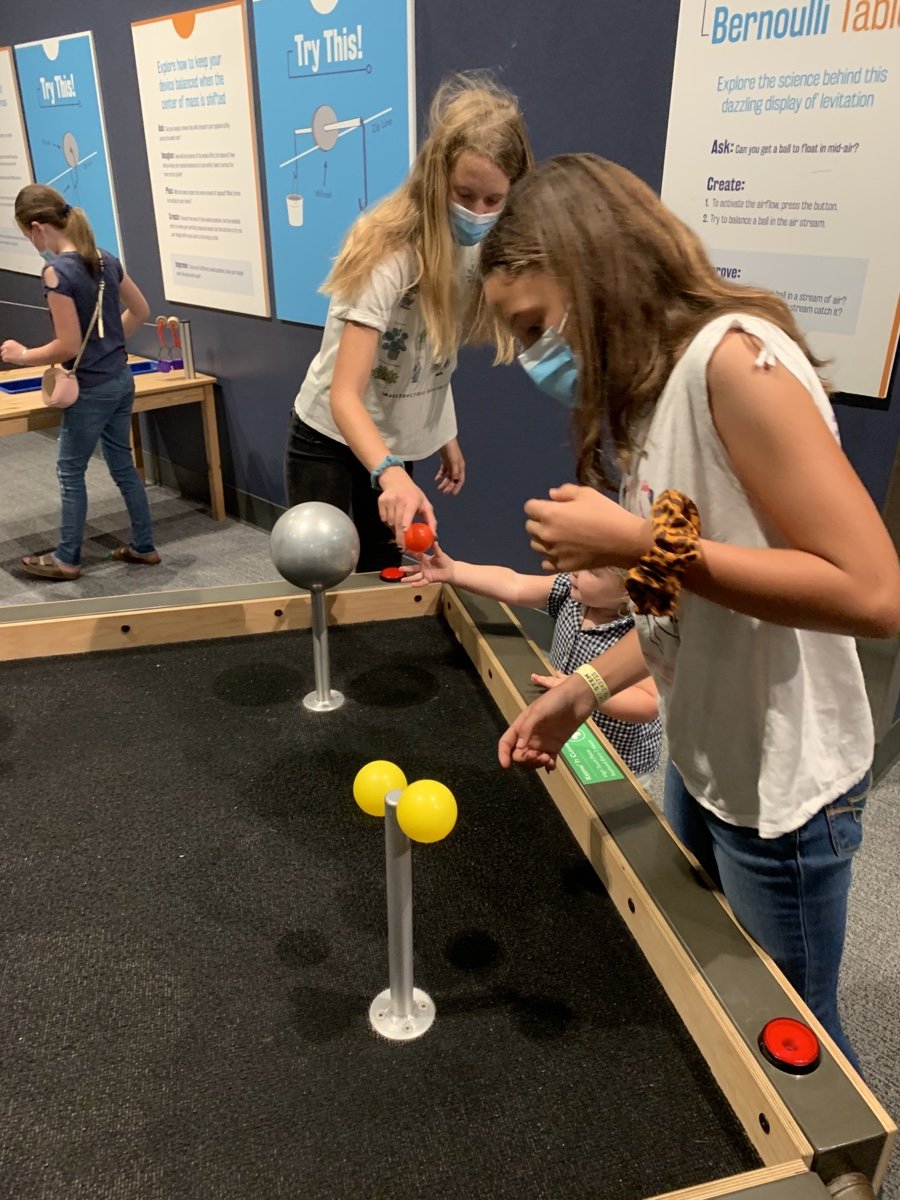 I went with my kids to the science museum the other day and the “Bernoulli table” with balls floating on high-velocity air streams created the “hands-on” and visual experience to illustrate Bernoulli’s principal.

It was a lot of fun and very interesting to see the balls suspended in the air, but imagine if I started to explain the principals of pressure and velocity and mass to the kids using words and they just look blankly and say “I’m more of a hands-on learner”.

Do you see the issue?

Language needs to be used to explain the “why” behind something we can experience hands-on and if you refuse to listen or read the manual or plaque then you are left with experiences and observations that have no context or meaning.

To some degree, we are all hands-on learners but to really understand we would be well served to become, attentive readers and listeners as well. 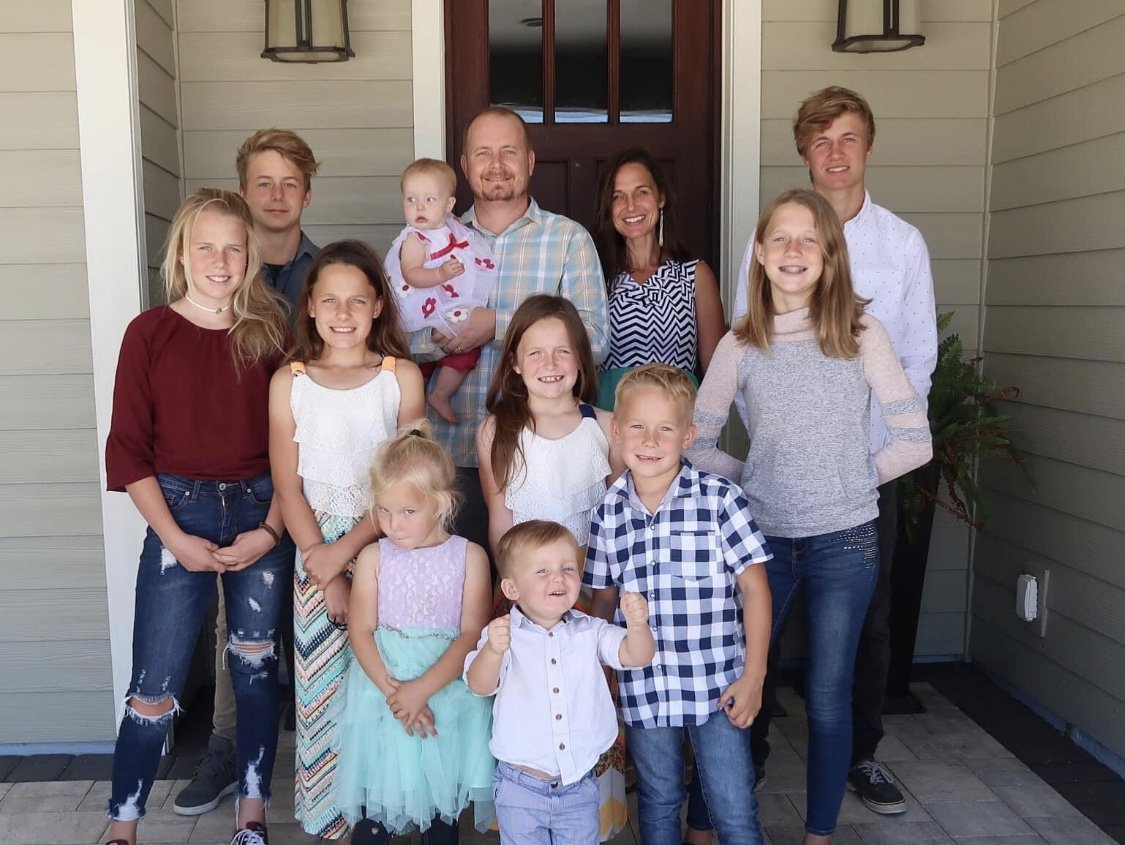 You must be so patient

It’s no secret that Leilani and I have 10 kids. When Leilani goes to the grocery store she gets three comments from people most often

We laugh because we ARE NOT naturally patient people AT ALL and we have no secret magical powers or heavenly bestowed holiness. People imagine that to have 10 kids and remain (mostly) sane you must have some special gift.

The truth is much more boring and mundane.

In the same way, you don’t need to be naturally gifted at listening or reading to learn, but it sure helps if you work at it

Obviously, some people are more academically gifted naturally than others and some people have learning challenges and disabilities. This isn’t to downplay that reality but I do think you would be better served to stop using it as an excuse.

A visual problem solver is much like a hands-on learner in that they prefer to have a problem in front of them to find the solution rather than using words to describe it.

Some of the BEST problem solvers I’ve ever met weren’t big talkers, instead, they create images in their mind of a problem, structure or machine and work over the problem using the visual centers of their brain.

If you think about it, converting ideas and mental pictures to language is actually pretty inefficient if there is no reason to do so.

The challenge comes in when you need to communicate those ideas to another human.

They will often draw diagrams or ask you to draw diagrams and they may stare at them a bit as they build the visual model or “cartoon” in their head.

The visual problem solver doesn’t make excuses about how they prefer to learn. They don’t make it someone else’s fault that they aren’t getting a concept.

The visual problem solver finds workarounds to get things out of words and into their head where they work on it and ultimately SOLVE THE PROBLEM.

Take responsibility for the translation gap

As a learner, it is our responsibility to take what we can from all sources and methods we can to learn how to problem-solve. I would argue that visual problem solvers actually have a HUGE advantage in our trade because by it’s very nature it is visual and hands-on.

It doesn’t change the fact that reading manuals is often the only way to get certain information and may continue to be a bit of a struggle. Where the person who always repeats that they are a “hands-on learner” may wait for someone to translate words on the page for them, the visual problem solver may build a cartoon in their head or doodle a diagram… whatever it takes to the solve the problem.

Bryan Orr is the CoFounder of Kalos Services Inc. a Multi-Discipline HVAC/R Contracting Company in Central Florida as well as the creator and founder of HVAC School podcast, YouTube and Website