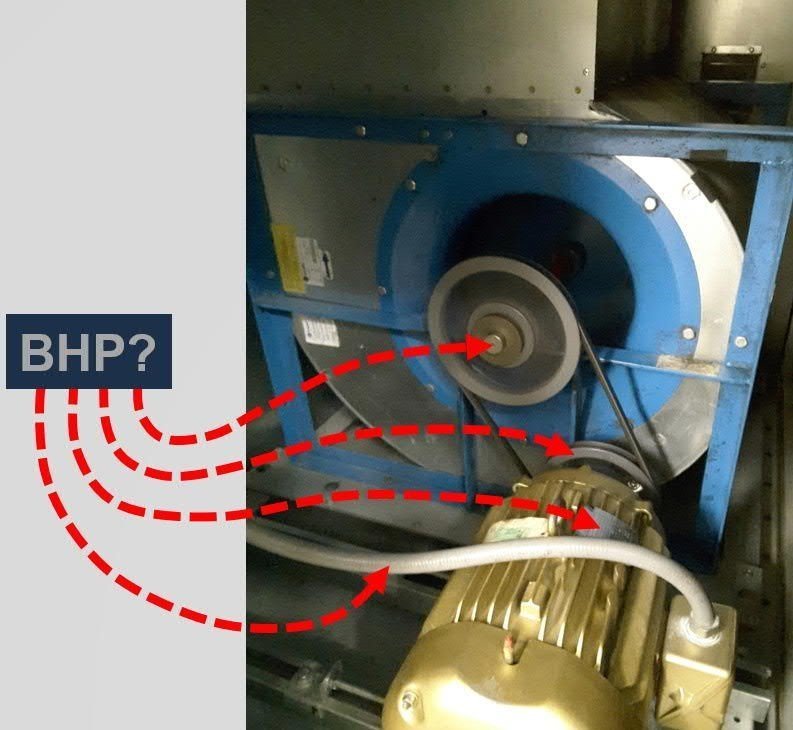 Brake Horsepower (BHP), motor nameplate HP, and the actual electrical power (watts) a motor will consume are different, but related concepts. This gets confusing, so we will tackle them one at a time.

Let us start with simple definitions of work, power, and horsepower.

Work = distance in feet x force in pounds, both applied in the same direction.

He is exhausted after powering the toaster just a few minutes to toast 1 piece of bread. Put another way, imagine continuously lifting an endless supply of 200 lb barbells from the floor up to a height of 7 feet (clean & jerk). To do work at the rate of 1 HP, you would have to lift @ 24 of these barbells up 7 feet, every minute. Every minute, 24 barbells, 200 pounds each, lifted up 7 feet. 33,000 ft x lbs / minute / 7 feet x 200 lbs = 23.6 barbells / minute. This helps us understand why it takes approximately five people to do the work that one horse can do.

Motor nameplate HP indicates the amount of mechanical HP a motor can safely deliver via its shaft without overloading/overheating. Motors are not always delivering full nameplate HP to the load they are driving. The load required by fans, pumps, and compressors usually depends on the fan or pump’s design, the flow rate (cfm, gpm) it is handling, and the pressures that are developed. Thus, a motor with the capability of 3 HP may be driving a load that only requires 2 HP.

Brake horsepower (BHP) refers to the actual mechanical horsepower received at the shaft of the driven machine, such as a fan, pump, compressor, etc.

The watt is also a unit of power. 1 mechanical HP is equivalent to @ 746 watts. Electric motors do not operate at 100% efficiency, thus some of the wattage consumed by a motor converts directly to heat. The rest (the majority) of the wattage provides useful mechanical shaft power to the load that is being driven. For example, a 3 HP motor that is fully loaded and is operating at 90% efficiency will consume a total of 3 HP / 0.90 = 3.33 HP in electricity…or 3.33 HP x 746 watts / HP = 2,487 watts. Of the total 2,487 watts of power being consumed by the motor, only 3.0 x 746 watts / HP = 2,238 watts are converted to useful mechanical shaft power.

To avoid confusion, make sure you understand these different units, or ways of measuring & expressing power.