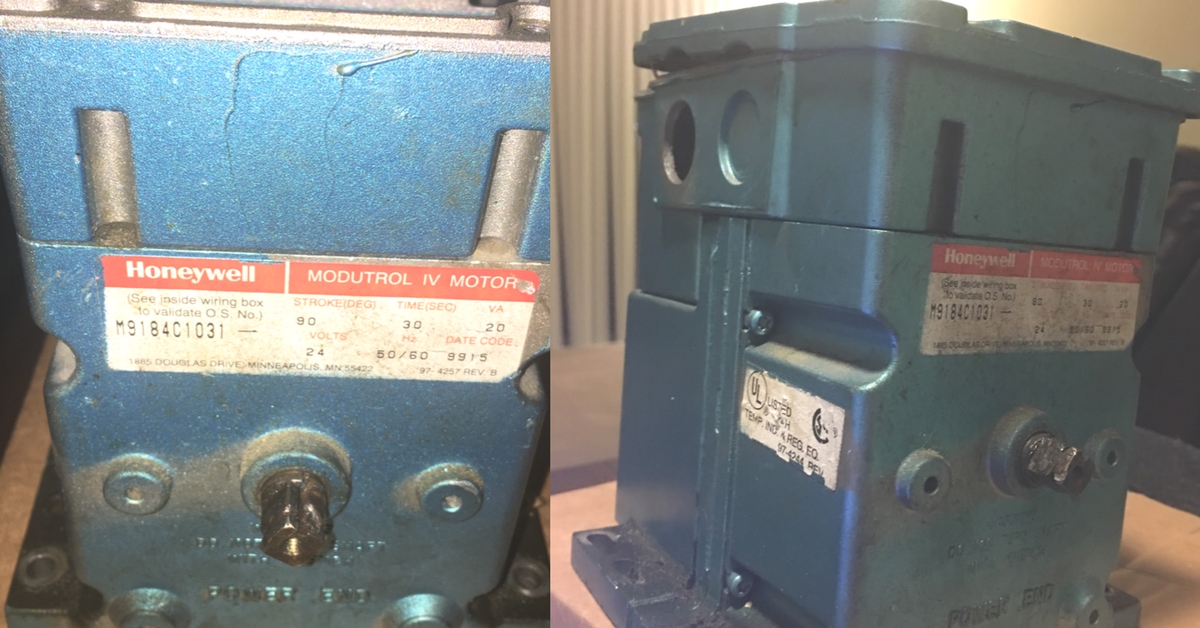 Modulation motors are not often seen in residential equipment but are used quite often in commercial and industrial applications on many different types of equipment. I see them primarily on larger burners as a means to control the fuel firing rate, but they are used to control water flow through heating coils, the water level on cooling towers, and countless other applications. Anytime you need to control the flow of a medium (gas, water, air) and have valves or dampers that modulate flow; a mod motor probably has been used for it at some point. The more basic mod motors have been around for a long time, and in many applications have been abandoned for newer and more precise control apparatuses, like servo motors. But there are still a ton of them in the field. I replaced three this week, as a matter of fact. So I thought it fitting to share some information on them.

Here is your basic mod motor. As the label indicates, the voltage required to control the motor is 24 VAC. This is most common on mod motors I typically work on, but there are other control voltages utilized in different applications. 2-10 VDC, 4-20ma, and other setups are fairly common, but those get more complicated, and I want to keep this as simple as possible, so we will focus on 24 VAC.

On the side of the motor, there is a square shaft end. This is the connection point by which the motor actually changes whatever it is controlling. The motor pictured above came off of a 350 horsepower Superior brand boiler with a Gordon-Piatt burner. The shaft end connected to a linkage arm, that linkage arm connected to a gas butterfly valve and an air damper which controlled primary combustion air. As the motor stroked open, it opened the gas valve and air damper simultaneously, therefore increase the firing rate/size of the flame. As the motor strokes closed, the firing rate is decreased. This motor also contains high and low-end switches. The low fire end switch being normally closed ( closed when the motor is in the minimum position), and the high fire switch being normally open and closing when the motor reaches the maximum open position. The end switches are used in industrial burners to prove that the valve is functioning to the burner controller. Generally, the motor moves to the fully open position during per purge/prelight off and then back down to the minimum open position during light off. If the motor does not open or close the proper end switch at the correct time, the burner control will not allow the sequence of light off to continue and go into a lockout. Not all mod motors contain high and low-end switches, but many do and they do fail. I’ve replaced 5-7 over the last year.

Troubleshooting a modulation motor is fairly simple. The control voltage is necessary for the motor to do anything. If control power is not present between terminals T1 and T2, then the transformer supplying the power should be checked. Transformers are checked by voltage on the line side and the load side. The transformers supplied with the motors are 120 VAC line to 24VAC load. If the line voltage is not present, then we need to determine why. If 120V is present, but no 24v on the load side, then that would indicate a failed transformer. Transformers don’t fail for no reason very often, so the control side of the circuit should be checked for shorts and grounds before the new transformer is installed, or you may run the risk of blowing the new transformer when the power is restored. Trust me, I speak from experience. If control power is present at T1 and T2, removed the wires from the R, W, and B terminals. A jumper from R to B should cause the motor to drive open, and a jumper between R and W should cause it to drive closed. Some motors contain a spring that causes the motor to close when power is removed, so keep that in mind when troubleshooting. If the motor doesn’t open or close when jumpered, and the correct control power is present, well then you have yourself a bad motor. If the motor works properly when jumpered, but not in normal operation when connected to the control circuit, then there is some issue with the components controlling the motor. Some of these systems can be quite complex, so if you end up in this situation, good luck. You may need your thinking cap.

Any modulation motor you will encounter will operate the same. Control power is required, and some input to cause the resistance change needed for the motor to open or close. If you encounter issues with one, the basic motor troubleshooting techniques should be the same. It doesn’t matter if it’s on a boiler, cooling tower, water tempering system, or anything else.

You can find more info on the Honeywell Modutrol line HERE