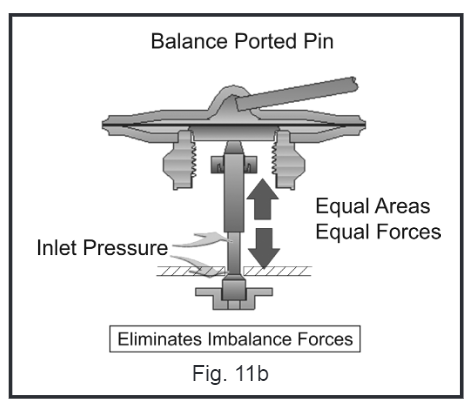 I walked into a supply house the other day and I was looking at a “universal” expansion valve on the shelf. The friendly guy behind the counter saw me and walked over, after saying hello he offered

Now I am a bit of a trouble maker, I should have just nodded and said “uh huh” but instead I asked, “what does balanced port mean?”. The counter guy sort of half shrugged and said: “I guess it means it works on a lot of different systems?”

I would bet that most people in the industry have heard the term “balanced port” and figure it sounds like a good thing but don’t really know what it does. Not long ago, I would have been one of them.

while the system is within its design operating conditions these forces are the primary forces at work that allow the valve to “set” the evaporator outlet superheat.

There is a fourth force and that is the opening force applied by the refrigerant passing through the needle. When the inlet (liquid line) pressure is within the normal operating range this force is accounted for in a normal TXV. In cases where the liquid pressure is higher than usual the force will be greater allowing more flow through the coil and when it is less it will allow less flow.

The result of this effect is fluctuating superheat based on liquid pressure which may be acceptable in small amounts but can become unacceptable quickly on systems that require accurate evaporator feeding or systems that have a wide swing in condensing temperatures and pressures.

Sporlan largely solved this particular issue in the ’40s when they brought the “balanced port” valve to market. While the technology is nothing new it has been improved on over time.

Balanced port TXVs can vary in design but they solve this problem by allowing the inlet pressure to affect the top and bottom of the needle (orifice) equally. This eliminates (or reduces) the liquid pressure as an opening force and instead turns it into a “balanced” force that neither opens or closes the valve.

If you have an application where the head pressure is allowed to change or “float” over a wide range, the balanced port TXV is a great choice.