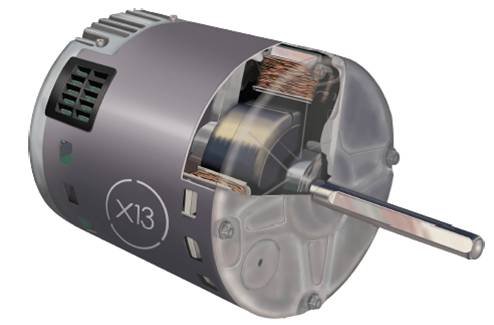 The Difference Between Variable Speed and X13 Motors

First, let’s cover the basics. X13 is a brand name for the Regal Beloit / Genteq brand of constant torque motors, there are other manufacturers who make them, but the term “X13” has become pretty much synonymous for the fractional horsepower HVAC constant torque motor.

Also, this article is specifically discussing the common residential/light commercial motors. There are other types of variable and constant torque motors and equipment not being addressed here.

Both variable speed and X13 motors are ECM or “Electronically Commutated Motors,” This means the DC power that drives them is electronically switched from positive to negative to spin the motor. Both are more efficient than the typical PSC motor with ECM motors commonly being about 80% efficient and PSC being about 60%.

Both X13 and variable speed motors are DC (or alternating DC if you prefer), 3 phase, permanent magnet rotor motors that use back EMF to determine motor torque and adjust to load conditions.

The primary difference is the type of inputs to the motor control. A variable speed motor is programmed for a specific piece of equipment to produce a set amount of airflow based on the particular static pressure profile of that system as well as based on the inputs from the air handler circuit board or system controller. In other words, a variable speed motor can ramp up down based on the static pressure as well as the staging of the equipment, pin/dip switch or controller settings for desired airflow output and “comfort profiles” that can be set up to allow the blower to ramp up or down for enhanced dehumidification and comfort.

An X13 motor is programmed to produce a set motor torque based on which input it is receiving 24v. This means that while an X13 motor is more efficient than a PSC motor and does a better job of ramping up to overcome static pressure increase it does not have the level of control that a variable speed has and it also does not produce an exact airflow output across the full range of static pressure.

This is why when you check the blower charts on a unit with a variable speed motor the CFM will remain the same over a wide range of static points, but when you look at an X13 system, the CFM will drop as the static pressure increases.