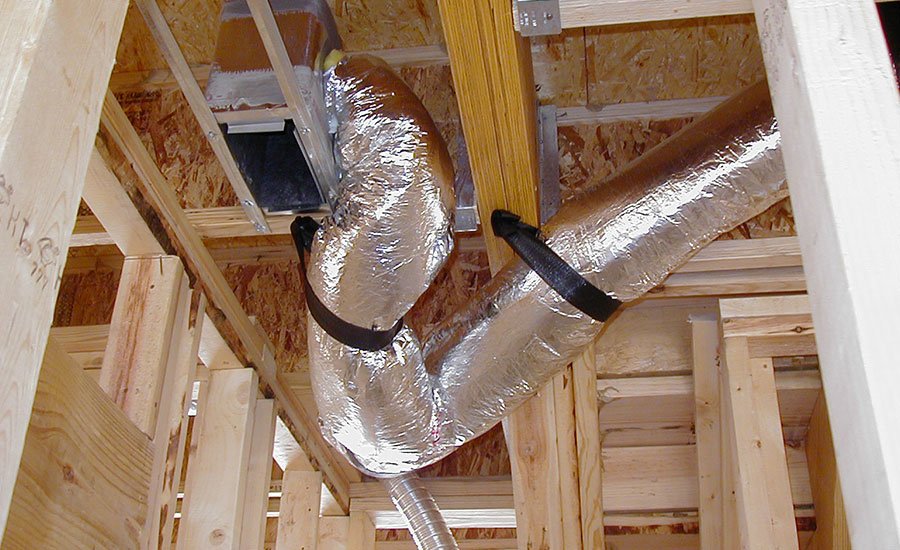 Some techs and contractors swear that flex ducts are an evil invention and should never be used in ANY circumstance. I agree with what duct design expert Jack Rise said on the podcast when I asked him about flex ducts he said:

While the proper sealing of ductwork in unconditioned spaces is nearly universally recognized as important, it is rare that a flex system get’s installed properly in these other important areas.

Some guidelines suggest pulling a 25′ piece of flex fully extended for 1 full minute before attempting to install it. This reduces the compression and the depth the of the corrugation (the accordion spiral inside the duct). The more compressed the duct is when it’s installed the greater the air resistance of the duct will be. The air duct council states that 30% of compression can result in 4 TIMES the air resistance. This means that fully extending the flex is a big deal and may be one of the most overlooked aspects of flex system installations. Cutting off that 2′ – 6′ of extra flex on the end instead of just “using the whole bag” can mean the difference between a good and a poor duct system in many cases.

Strap and Support the Flex

Jack Rise spoke about how he tested a duct and measured a .2″ wc change in static when he altered a duct from sagging to properly strapped. In retrofit applications, many companies focus on “sealing” connections but they often don’t truly address sagging ducts with proper strapping. the allowable amount of sag is only 1/2″ per 4′ of length which isn’t much. Don’t ONLY rely on the code required strapping in your jurisdiction, just because a system passes inspection doesn’t mean it’s installed correctly.

Keep the Curves to a Minimum

When designing a duct system you must calculate TEL (Total Effective Length) not just length. In a flex system each curve has a HUGE impact on the TEL and when a field install doesn’t match the design it can throw the whole system out of whack both from an air balance standpoint as well as a system performance by increasing the TESP (Total External Static Pressure). Every bend and angle matters so keep it extended, properly routed and well supported and all will be well so long as the design is correct.

Seal all the connections

As with all ducts the connections need to be well sealed. With flex, this will generally need to be done with mastic and the BEST way is to fully seal and allow the inner liner to dry before pulling the insulation over the connection. Also keep in mind that leaks, where the boot / can meet the sealing, are very cannon leak points and it’s a good idea to seal them from the inside and/or outside to the final floor or ceiling before installing the grilles

For more info go to the ADC (American Duct Council) website at flexibleduct.org or download their excellent guide HERE