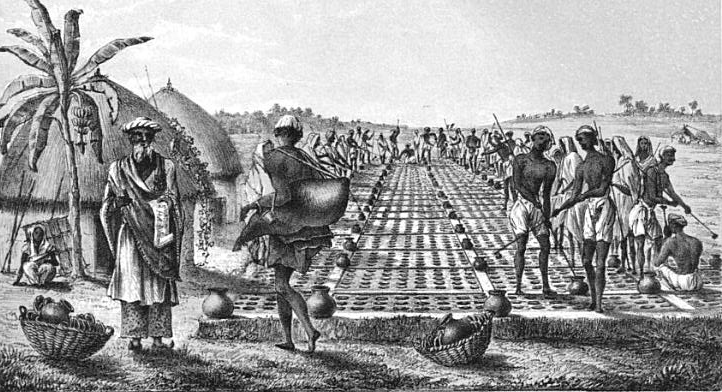 You likely already know a bit about radiant heating from your education and work in the HVAC industry. Science textbooks like to use the sun and campfires as classic examples of radiant heat transfer. We also have plenty of heating devices with radiation right in the name, such as water radiator heaters and radiant space heaters.

It turns out that before compression refrigeration, ancient people were experts at using the cooling and heating methods at their disposal. Radiant heating/cooling was one of the methods they used. Their knowledge holds some valuable clues that can help us envision and develop modern radiant cooling technologies.

We will take a bit of a meandering path to answer the question posed in the title, but we will get there.

Radiation is one of three means of heat transfer. The other two are conduction and convection.

Conduction is the transfer of heat through touch. When an object with more heat touches an object with less heat, it transfers some of its heat energy. Think about heating a pan on the stovetop. The pan gets hotter because the flame directly touches it and transfers its heat.

Convection is the transfer of heat through the air, where molecules float around freely. Have you ever held your hand above a pot of boiling water? Even though you didn’t directly touch the water, your hand still got warmer. That’s because your hand was heated by the free-moving hot gas molecules in the vapor above the water.

Radiation is a bit more complicated than conduction and convection. Heat transfer occurs through electromagnetic waves as they move through air or a vacuum. An example of this would be your microwave oven. The electromagnetic waves are generated, and your food gets warmed up because the water molecules in the food absorb the radiant heat and vibrate faster.

But what about radiant cooling?

Every physical body spontaneously emits some degree of thermal radiation. We constantly give off heat to the environment around us, and we absorb the heat given off by the people and objects around us.

The earth absorbs solar radiation during the day and gives off heat at night. When the sun doesn’t heat a part of Earth’s surface, Earth emits some of the heat it had absorbed during the day. Clear, cloudless nights are best for emissions, as clouds reflect electromagnetic waves back to Earth’s surface.

Have you ever noticed that the ground in the morning has less dew on it when it’s under an awning or even tree branches? This occurs because the covering blocks radiant heat transfer from the ground to the night sky, which keeps the ground warmer and sometimes keeps it completely above the dew point.

Certain materials emit more heat than others. Some of the white paints used on commercial building roofs have a high thermal emittance rate and don’t absorb heat easily, which helps passively cool the buildings. That’s one way to cool buildings without entirely relying on electricity.

Engineers have developed radiant cooling panels for indoor usage, too. These panels absorb heat emitted from people and objects in the room to maintain a cool temperature.

Some companies, such as MESSANA, have developed dual-purpose indoor radiant cooling panels. These absorb heat in the summer and emit heat in the winter, keeping buildings comfortable year-round.

The idea of radiant cooling sounds great, but it has its limitations when used indoors.

If you choose to install radiant cooling panels indoors, a secondary dehumidifier is almost always needed.

Space blankets work by trapping your body’s thermal radiation. The heat leaves your body, but the blanket reflects that heat off its surface. With nowhere else for the heat to go, your body reabsorbs it.

The blankets are made of highly reflective material (or sometimes coated in a highly reflective metallic agent) that doesn’t absorb heat well. Heat must be either reflected or absorbed by objects, so space blankets reflect around 95% of the heat your body gives off. Your emitted heat goes straight back to you.

These blankets were initially designed to help protect astronauts from the cold of outer space. The deep-space temperature is just barely above absolute zero (0 kelvins, -460° Fahrenheit), clocking in at approximately -455° Fahrenheit. That’s less than 3 kelvins! You know it’s cold when you see single-digit kelvins! (At least that’s what my grandma used to always say)

In the summer, especially here in Florida, the heat can be downright brutal. Many of us want to send it to a faraway place where it can never come back.

But what if we could banish the sweltering summer heat to a lonely frontier where it won’t cause trouble? Like, I don’t know, banishing it to outer space?

It’s possible to reject heat from an entire building to outer space… or at least the upper atmosphere. Scientists are still working on ways to maximize rejected heat, but it’s definitely possible. Many planners of new buildings have harnessed the power to reject heat and send it back to space. But did you know that radiative cooling was first harnessed by the people of India and Iran long ago?

Space is cold, but what about our stratosphere?

Earth’s stratosphere is quite a bit warmer than deep space. Just to keep everyone on the same page, the stratosphere is the atmospheric layer that lies between the troposphere (where we are) and the mesosphere on top of it.

The stratosphere is unique because it has the ozone layer, which increases the temperature with higher altitude. Inversely, temperature decreases with increasing altitude in the troposphere and mesosphere.

Theoretically, if we could reject heat from Earth and bypass the lower atmospheric layers, the cold of outer space is a perfect place to dump excess heat.

Long before modern refrigeration technology, the people of India and Iran used to make ice at night. I’m going to focus mostly on ice-making in Kolkata, India.

India only gets cold in the northern mountain ranges, so it wasn’t like people in tropical Kolkata could march to the rivers and cut ice like in Disney’s Frozen. No, they had to rely on radiative cooling to do it.

At dusk, they would fill pits with unglazed ceramic trays. Those trays held some pre-boiled water. The people would then line the bottoms of the holes with sugarcane or other plant material to insulate the trays.

The water would freeze overnight because its heat would leave the earth via radiation, thus cooling what was left behind. This method worked only on clear nights, as there were no clouds to reflect the heat back to Earth’s surface. The heat would escape to the upper atmosphere, which is very cold and can accept our heat. (I’ll talk more about that later.)

People would collect the ice in the morning. They would move it, beat it down, and store it as a single mass in another large pit. That collection pit was insulated with straw and covered by a thatched roof.

Space blankets are good for using radiant heating to keep bodies warm, but what about radiant cooling technologies?

According to the MIT Technology Review, SkyCool Systems has developed radiative cooling panels that can increase the efficiency of heating, cooling, and ventilation in buildings. These panels aren’t fully efficient as they stand, but they take some load off the electricity grid by rejecting indoor heat and reflecting incoming heat from the sun’s rays. For business owners and building managers, the most exciting part about this technology is the savings potential.

For me, the most exciting part about it is the science. SkyCool Systems’ panels work because they reject heat into space by taking advantage of the electromagnetic spectrum.

Humans are capable of seeing visible light, which is in the middle of the electromagnetic spectrum. The color spectrum of visible light is based on each color’s wavelength. Red waves are the longest and have the lowest energy. Violet waves are the shortest and have the highest energy. That’s why the longer waves just below visible light are called infrared (beneath red), and the shorter waves just above visible light are called ultraviolet (beyond violet). Some animals can see limited infrared or ultraviolet light, but humans can’t see those with the naked eye.

Still, we’re interested in the infrared rays here. All objects radiate some heat via infrared waves. As I said earlier, our bodies are a major source of infrared rays. That’s how mosquitoes can find their victims. They’re one of those animals that can see limited infrared light, so they see the heat emitted by our bodies.

Our atmosphere reflects some of our emitted heat back to Earth’s surface. However, there is a range of infrared wave frequencies that can bypass the atmosphere. The MIT Technology Review says that this range is between 8 and 13 micrometers.

If radiant barriers can reject infrared rays and send them upward at a wave frequency between 8 and 13 micrometers, the heat would theoretically be cast to outer space (or at least the upper atmosphere). The heat wouldn’t be sent back to the lower atmosphere because it would be within the appropriate range to slip past it.

How can we manipulate those waves in direct sunlight?

A lot of the information I just described is highly conceptual. Without a practical application for all this science, sending heat to outer space is nothing more than a pipe dream. So, where does the practicality come in?

Luckily for us, Stanford engineers have been on the case. In 2014, Dr. Shanhui Fan led an engineering team to invent a new material that reflects visible and invisible light. The invention is a coated photonic panel that rejects heat and reflects it from incoming sunlight during the day.

The coating is multilayered silicon dioxide and hafnium dioxide over a layer of silver, and it’s only 1.8 microns thick. The panel’s coating serves as a mirror to the direct sunlight. Dr. Fan’s findings reported that the photonic panel reflects up to 97% of sunlight away from the building during the day.

Outer space already takes in our rejected heat at night, as we saw from ancient India and Iran’s ice-making technologies. However, the Stanford engineers’ panels can use outer space as a heat sink during the day.

According to MIT’s Device Research Laboratory, photonic radiative cooling panels can cool a structure about 10.8° Fahrenheit below ambient temperature during the day. However, they are confident that these panels will eventually cool a structure by up to 36° Fahrenheit. Theoretically, commercial buildings would be able to maintain OSHA’s recommended 68°-76° temperatures without traditional air conditioning, even on those 95°+ Florida summer days!

Obviously, anytime we can transfer BTUs in the direction we want without spending money on watts, we want to take advantage of it.

There may come a time where we utilize energy “banking.” We could use panels that continuously reject energy from a bank of fluid or gel, even when that cooling capacity isn’t required. That “banked” energy could then be deployed during high load periods to balance out the grid or capitalize on smaller capacity systems.

There could be applications like this to make better use of CO2 in warm climates to prevent transcritical operation. It could be used in grocery and industrial cold storage applications to decrease load variability and so on.

All of these ideas have costs and barriers to overcome. Still, as we look toward better and more efficient technology, we may do well to look at what our ancient forbearers already knew and send some of our heat to space.