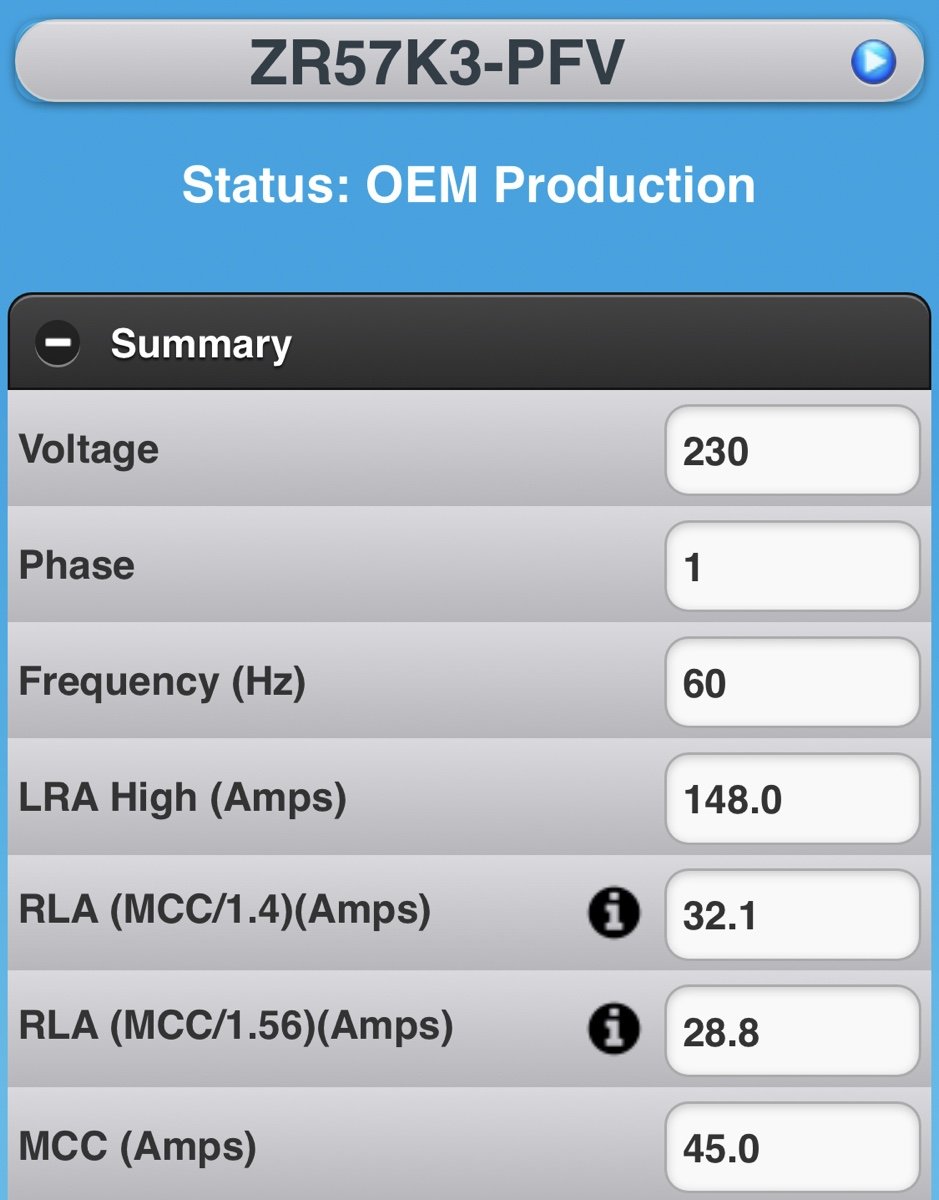 What You Know About Start Winding Inrush Might Be Wrong

Take a look at the specs from this Copeland scroll compressor pulled from the Copeland Mobile App (which is an incredible app by the way).

This is a single-phase compressor so the amperages listed are based on an amperage reading from the wire connected to the common terminal.

LRA is locked rotor amperage which is the expected measurable starting amperage and RLA is rated load amps, meaning the amperage it will draw when running normally at its rated load. You may wonder why there are two different RLA ratings here… that’s not what this tech tip is about but if you get the app and click the i with the circle around it you can find out.

The point is we are always taught to measure amperage on common with single-phase motors, but do you know why?

A single-phase motor like the one shown above has three terminals (Common, Start and Run) but only two actual windings (Start and Run). The common terminal is just the “common” point between both of the windings so when we measure the amperage on common we see the total current of both windings.

In tradeschool we learn Ohms law which teaches us

However, when we try to apply that in the field we realize some things pretty quick that get in the way of applying that neat little formula

When we measure the ohms of windings from terminal to terminal it is mostly meaningless because the readings are often very low anyway… sometimes so low that your meter becomes inaccurate.

Notice how low the resistances are of this same compressor.

The real resistance of the motor only shows up when it is energized with alternating current and the magnetic fields begin to interact, this total resistance when energized is called impedance.

We do know that the start winding has a higher static ohm value than the run winding and that when we add start to common and run to common together that it will equal run to start (which is a fairly obvious statement since common is just a center point) and that if the thermal overload is open we will measure OL between C-R and C-S but will read the combined value R-S.

These are all true and are reasons to pull out the meter but this still doesn’t tell us anything about the title of this article and you are probably wondering what the heck I’m driving at.

But one more thing we need to come to an agreement on.

The run winding is connected “Across The Line”, in other words with one leg of split phase power connected to Common and the other to run. The current that travels through that run winding is completely a function of the total impedance of that winding which has several factors including the static winding resistance, the inductive reactance of the windings and the back EMF that builds as the motor starts running.

In other words… the amperage starts high because the resistance starts low in the run winding and amperage goes down as the motor gets up to speed because the total impedance increases.

Remember, ohms law teaches us as resistance goes up, amperage goes down if the voltage stays the same.

Here is an image from an oscilloscope on this very same compressor referred to above with 197V applied, a proper run capacitor and no hard start kit…

That’s because unless the start winding has some form of start capacitor it cannot draw any amperage higher than what the run capacitor will allow. In essence, the run capacitor becomes a ceiling or current limiter that allows only so much stored current per cycle and no more.

Measure the running amperage on the start winding with a capacitor slightly larger, slightly smaller and then with none at all. You will see higher amps, lower amps and then (obviously) no amps.

Try taking an inrush reading on the start wire of a compressor with no hard start and see what you get.

Then try it with a hard start.

Notice anything different on the start winding amps? Can you see the moment the back EMF removed the hard start from the circuit? Was the TOTAL amperage actually lower with a hard start or was the time to start decreased and more current shifted to the start winding?