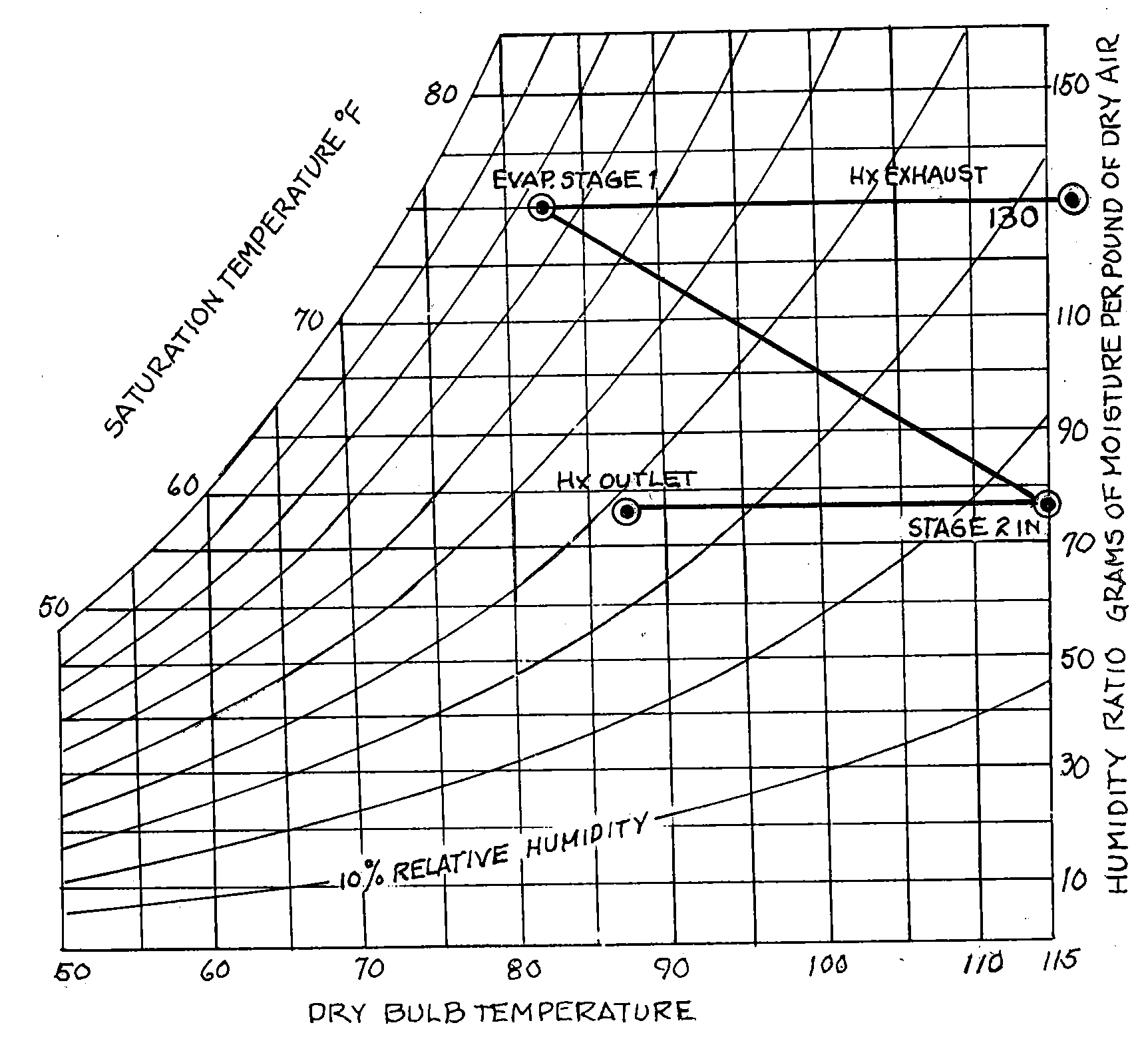 Adiabatic Cooling, Blower Settings and Why You Care 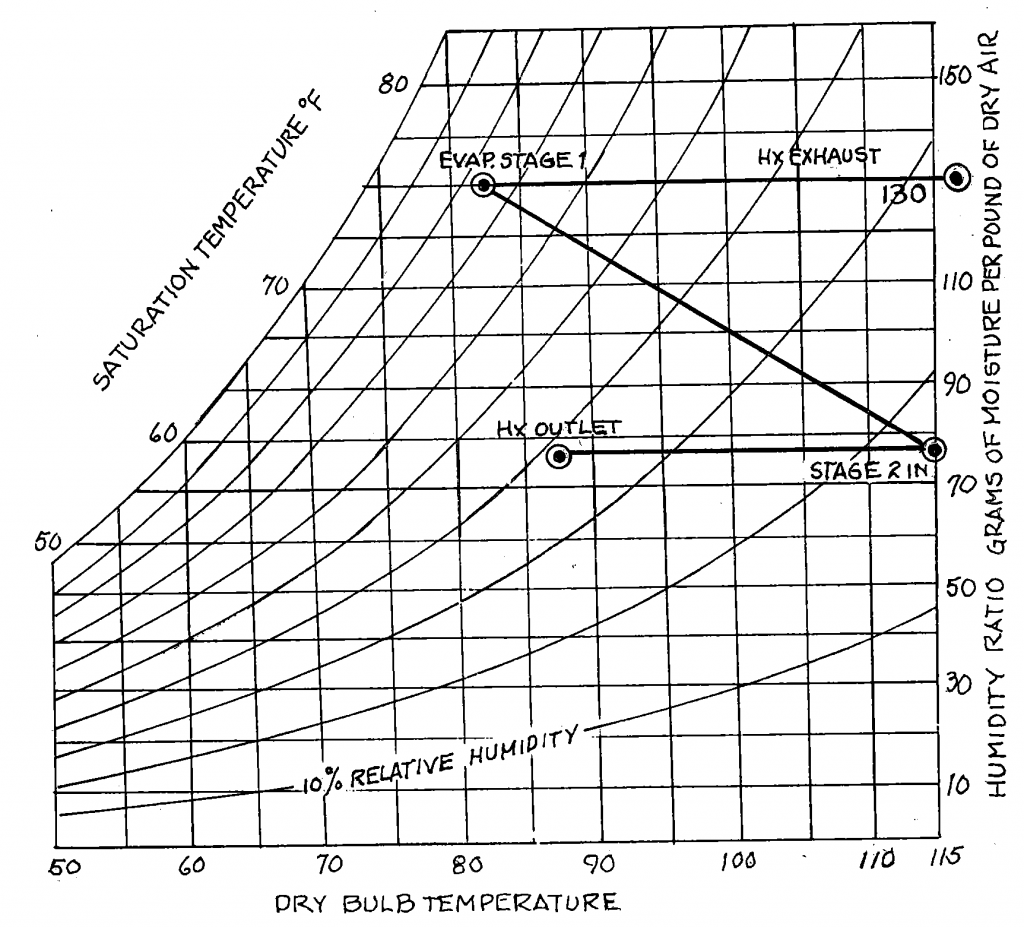 Just so you don’t get bored and quit reading let’s go straight to the point.

When the blower runs for more than a few minutes after the system has cycled off in cool mode the air may continue to be “cooler” (lower sensible temperature) coming out of the supply but the heat content of the air will remain unchanged.

The only reason I say “may” be cooler instead of “will” be cooler is that we are assuming there is moisture on the coil and/or in the pan and the indoor RH is less than 100%.

Translation: When you run the blower once the system has gone off in cool mode you will continue to cool for a while, but that extended cooling comes from the evaporation of water out off of the coil and out of the pan. This results in sensible cooling and greater sensible efficiency but also increased indoor humidity.

Translation of the translation: It may feel cooler but there ain’t any less heat in the air by the time you figure for humidity.

Translation of the translation translation: If you live in a humid place run shorter off-cycle run times and think twice before running the fan in the “on” position. If you are in a dry place then let it blow until your heart is content.

Whenever cooling occurs by direct evaporation of a substance into an airstream (think a swamp cooler) it occurs at no net decrease to the heat content in the air. The heat is just going from sensible (what you can measure with a thermometer) to latent resulting in higher relative humidity air.

Now let’s talk about why, but first some terms.

Heat = Molecular energy or total molecular movement within a substance
Temperature = Molecular velocity, the speed that the molecules are moving
Adiabatic Process = A change in temperature without a change in heat content

Think of adiabatic process like this – You have a whole room full of ping pong balls bouncing around in a zero-gravity room. The balls are molecules, their total motion is the amount of heat and the speed they move is temperature. If you were to change the size of the room by bringing in one of the walls the balls the balls would bounce faster because the available space was decreased so the “temperature” would increase but the number of balls and the total motion would remain constant (this is what happens to refrigerant in a compressor by the way). If you were to move a wall outward and increase the size of the room the speed of the of the molecules would decrease, resulting in less speed and lower “temperature”. All the while the number of balls and the total motion remained constant (which is what occurs at the outlet of the metering device). In both of these examples temperature (Sensible heat) changes but the total heat content does not change, these are both examples of an adiabatic process due to compression and expansion of contained molecules.

An adiabatic process can also occur in uncontained systems like open airstreams, and evaporation of water is one such example.

Evaporation of water is a process where heat is absorbed into water molecules as they evaporate from liquid water and become entrained in the air as a vapor displacing some of the nitrogen and oxygen in the air. When that heat is absorbed from the air into the water it results in lower sensible temperature, but the water is still CONTAINED IN THE AIR. This means that while the air may be cooler it still has all the heat contained in it in the form of water vapor.

Now for the real shock..

Water vapor is NOT more dense than dry air at the same temperature it is actually less dense / lighter than dry air, however, is does contain more heat (enthalpy for you nerds like me). This means that when you run the blower after a cooling cycle the moisture on the coil and in the pan are evaporated back into the space and depending on the RH of the air it will lead to sensible cooling but latent gains. This means cooler but higher RH and this is due to the higher heat content of higher RH air at the same temperature.

Once again, depending on where you live this may be positive or negative.

In Arizona or Colorado? Run that blower after the cooling cycle.

Florida? May wanna shut it off right after the cycle or maybe 90 seconds at most and leaving the fan in the “on” position will likely result in a small increase of indoor RH.

P.S. – I also did a Facebook Live Video about it today