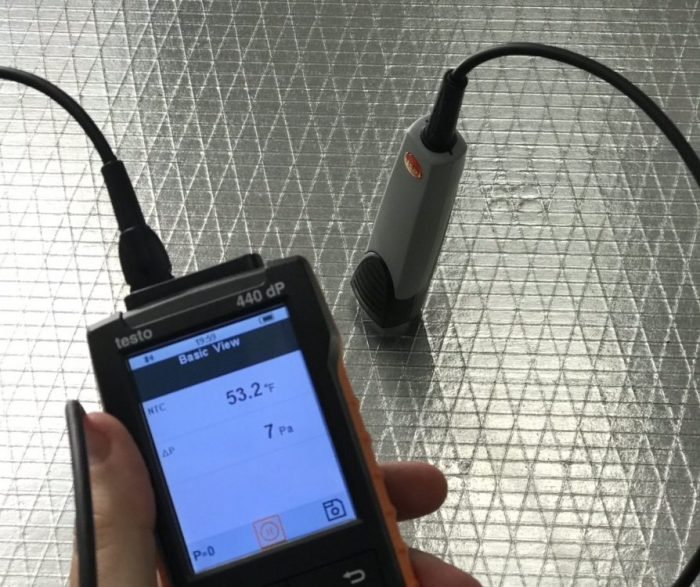 I am in the midst of testing the accuracy and repeatability of different types of airflow measurements for techs in search of the most practical methods for different applications.

One commonly taught method for measuring airflow is the temperature rise method where you use a heat source that produces a set # of btu/h such as heat strips and using the sensible heat air equation you can “easily” calculate the CFM being produced by the equipment. Let’s use this specific example to illustrate the challenges in getting a truly reliable measurement.

The first trouble comes in when you realize that almost no air is “standard air” which is 70°, 0% RH air at sea level. This leaves us with a .075 lbs per cubic foot standard air # that isn’t very accurate at all. To see how far off it can be, take a look at this calculator

In the case of my test, I found that a 1.05 multiplier was more accurate than 1.08 based on my indoor air conditions during the test.

Before the test, I used a TEC TrueFlow meter to confirm the actual system airflow. The system was a 2-ton Carrier FV ECM air handler and both the fan charts and the TrueFlow confirmed a system airflow of 700 & 718 CFM respectively.

I turned on the 5KW electric heat and ran the system with electric heat only for 5 minutes and then calculated the BTU/h of the heat strips at 12,158. I took a Delta T between the return riser and the supply plenum 24″ above the fan coil with the same pocket thermometer, The delta T was fairly stable at 1°.

So what went wrong?

In this particular case, we realized that the evaporator coil was still lower temperature than the return air and there was still moisture on the coil and in the drain pan because it had been running in cooling mode before which was decreasing the temperature of the air inside the air handler. Once the system ran in heat another 15 – 20 minutes the delta T came up to 6°.

Next, I moved the thermometer to the side and I was getting a 10° delta T, then to the back and all of a sudden I was reading a 17° delta T which was putting us right in the range, a little low actually (681 CFM). With the pocket thermometer, we were seeing an 11° variation depending on where I placed the probe!

So why was this occurring? Even at 24″ above the air handler the air had not fully mixed and there were areas defined areas of high temperature and low-temperature air in the supply plenum.

I gave up on the pocket thermometer and used a longer Testo probe and a K-type bead probe to get closer to the center of the air stream. I then took three measurements. One in the front, one on the left side and one in the back, added them together and then divided by 3, this gave an average of the supply air temperature from multiple points and the result was a calculation of 755 CFM which is still on the high side but definitely a usable figure.

I then tried it at different blower settings to see if this new averaging method worked under different air flow conditions, sure enough, it was within 10% of the factory fan charts and the TrueFlow.

Out of curiosity, I ran the system in cooling mode to see if I would get a similar level of variation and while I did see a few degrees difference it was only 2° due to the mixing in the blower after the coil.

For those of you who work on gas furnaces will coils on top you know how much the supply air temperature measurement can vary based on where you place your probe due to poor air mixing and radiant cooling near the coil, this is the same effect I was seeing above the heat strips.

In this case we are looking for an accurate differential temperature, the absolute values don’t matter as much. I found that the quick read and insertion depth of a K-type bead probe (Shown below) was a good tool for this measurement, even though it isn’t the MOST accurate reading.

I also neglected to add in additional BTUs of heat to the equation to compensate for what is added by the blower if we wanted to get really crazy.

Just in case you wondered