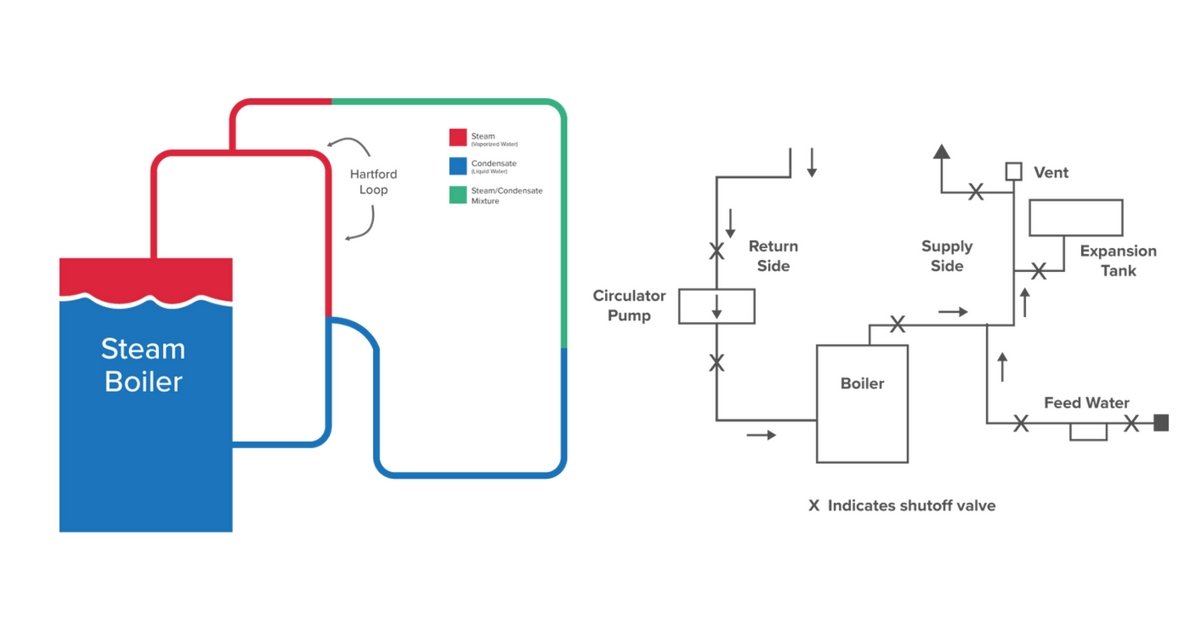 Please Note: There have been some legitimate questions about a few of the points in this article and in the diagrams. While Justin Skinner is an experienced tech and totally qualified to write this article we are going to be specifically looking into the question of the best location of the circulator pump as well as addressing “point of no pressure difference”. This article is still full of very useful points so it will remain up until we can research and potentially make a few changes. It is also worth noting that Dan Holohan’s book “pumping away” is considered the authority on the subject in addition to his website HeatingHelp.com. Thanks!

This article is the third in a series by senior boiler tech Justin Skinner. Thanks Justin!

Boiler piping is a much-debated topic in the HVAC trade. In fact, many books have been written on the subject. Should the circulator pump be on the supply or return? Where should the expansion tank be located? The best way to bleed radiators? If you talk to 10 different technicians, it is very possible to get ten different answers. And the short answer is, they are all correct. Because there is no “one size fits all” approach to boiler piping and layout. What works on one boiler system may not on another, and when a new boiler is installed on an existing system, there are plenty of potential issues which could be unique to that specific set up. Water is weird, sometimes. Like air, water doesn’t always do what you engineer it to do. I couldn’t count the times that I’ve been involved with projects with issues that left engineers scratching their heads because how they designed the water to flow through a system vs. what the water is doing is completely different. A technician need to be able to identify and correct what causes flow and heat exchange issues when we find them, and to do that, we need to know how it’s supposed to work.

Here is a basic drawing of a hot water boiler system. This is an optimal setup, in my opinion. I like to feed water into the supply side before the expansion tank. Typically this area is the lower pressure which allows feeding easier. A lot of the air should go to the expansion tank, and the rest will go out into the system, which is ok because if it is in the system, it can be bled as long as there are bleed valves. Also, it allows the cold feed water to heat up before it enters the boiler, avoiding shock. I prefer to put the circulator pump on the return side, as well. I’ve had better luck with flow and pump life when the pump is pulling from the system, rather than pushing into the system. Gravity and convection play a part as well. Hot water naturally wants to rise, and this natural circulation helps the return side pump move water much easier than if the pump were on the supply side of the same system. If a pump must be installed on the supply side, I prefer to install it after the expansion tank. Also, as indicated by all of the X’s, install shut off valves wherever you can. It will save you a ton of time and hassle later on when a repair is required.

This is all my opinion, and is based on my personal experiences. However, if someone calls and asks me a boiler piping question, my first suggestion is to do whatever the manufacturer recommends. Most boiler installation literature shows diagrams on piping set up, and that is the baseline for installing a new boiler, and possibly diagnosing a flow issue. Some manufacturers show the circulator on the supply, some on the return, and some don’t care either way. If you follow the manufactures specs, to the tee, 99% of the time you won’t have a ton of issues with flow and boiler operation.

Bleeding air from systems is necessary from time to time. Some boiler systems are much easier to bleed if they are piped to allow air to be removed by automatic vents or go to radiators to be bled. On system drain down and refill, I will typically bleed air after filling the system, while it is still cold and no pumps are on. After that initial bleed, I turn the boiler and the pumps on and allow the boiler to heat up to operating temperature. Once it is hot, I shut everything off, boiler and pumps. This allows the air that may be traveling with the water to go up, either to higher radiators or bleed points. I bleed air, turn everything on again, turn it off, and repeat until all the air is out.

A lot of older boilers guys I have worked with only bleed air with the pumps running. I could never get a satisfactory answer as to why, and I have had much better luck bleeding air from a system with the pumps off. If you do things differently, and it works for you, that’s great. Again, most of this is my opinion based on my experiences, and there is more than one way to skin a cat. Also, increasing boiler system pressure while bleeding helps speed things up. Most automatic water feed valves are factory set to keep the pressure at 12 psi, which is a pretty standard pressure. If your system is 12- 15 psi, bumping it up to 20-25 psi will help speed up the bleeding process. Always make sure you aren’t exceeding the pressure rating of the relief valve if you increase system pressure to bleed. And don’t forget to bleed excess pressure off after you have completed.

A basic steam system is much simpler than a hot water system. The natural rising of the steam allows it to move through the system, so there is no need for a circulator pump to move steam. Steam is a vapor, so there is also no need to bleed air, and no need for an expansion tank on a basic steam system. However, piping pitch is much more crucial to this system. The piping must have pitch or fall to help the steam rise, and more importantly, to allow the condensate to flow back to the boiler. Level piping holds water, so it must have fallen. Also, a Hartford Loop is required to connect the supply and return. This is basically an equalizer to balance the pressure between the two sides of the system. Also, as part of the loop, the condensate return line connects 2’’ below the water level of the boiler. The loop is used to prevent water from leaving the boiler through the return if the pressure is lower than the supply, or if there were to be a leak on the return. This piping configuration was mandated by code for a long time as a prevention for low water conditions causing the boiler to dry fire. With the invention of more advanced low water protection devices, it isn’t required by code everywhere but still is a good idea. It allows added protection if the low water safeties were to fail.

Steam traps are integral to steam systems as well. A steam trap is a check/float valve that allows condensate to pass through and return to boiler while preventing steam from passing. Steam traps are locating on the return (outlet) side of steam heat exchangers, radiators, etc. The goal is to keep the steam in the radiator as long as needed for it condenses to liquid water, thereby releasing as much heat to the radiator as possible. Without steam traps, the steam would blow right through the radiator, and would not stay there long enough to properly heat it up.

There are an infinite amount of piping configurations that you will run into of the course of a career, some much better than others. And certain situations dictate changes and configurations that may allow one system to work well, and the same configurations could cause a different system to function poorly. In short, every system is different, and a lot of times I am required to think outside of the box to make a poorly designed system work. But as mentioned at the beginning, if you have a basic understanding of how things are supposed to work, it makes diagnosing why it isn’t working a lot easier.