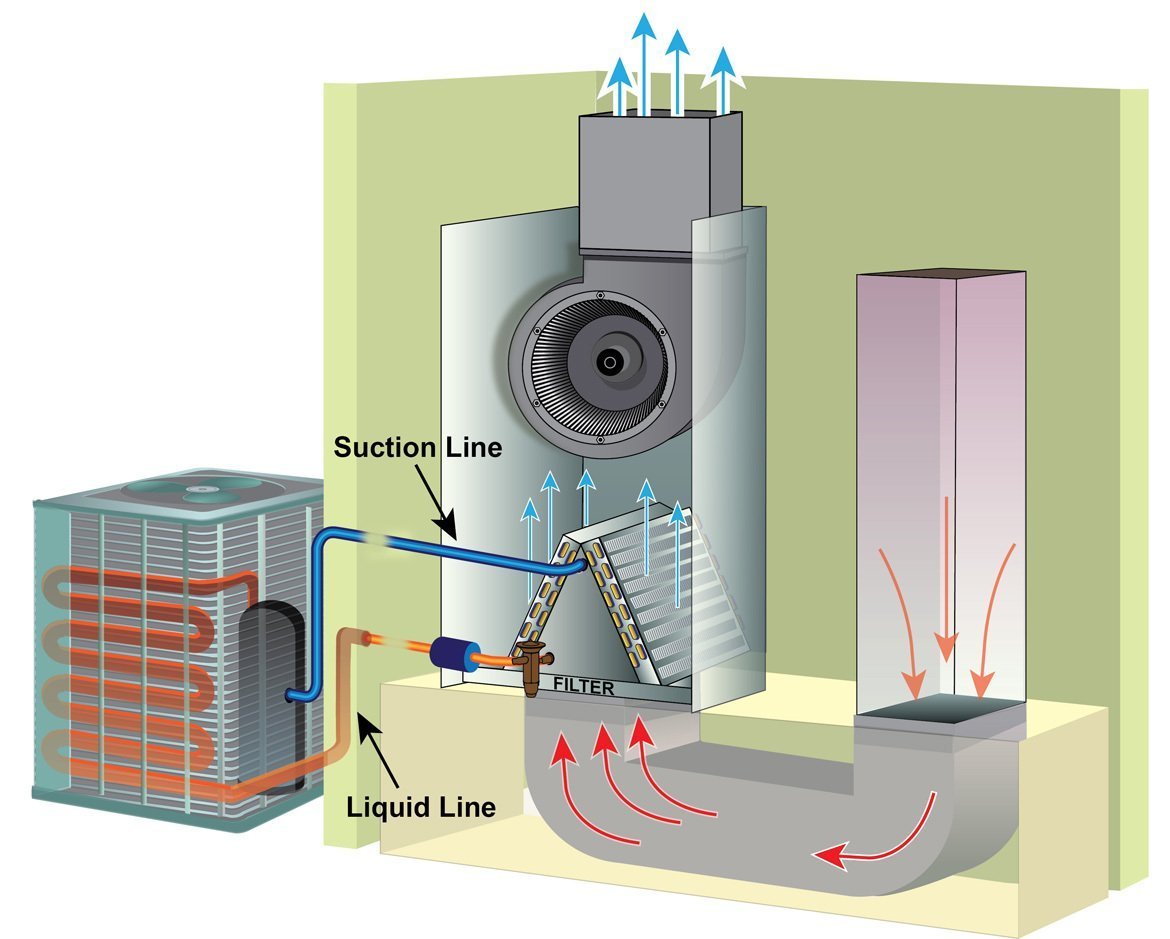 Airflow, Airflow, Airflow…. when we setup and commission comfort cooling and heating systems we need to pay more attention to airflow before we worry about the fancy controls or the refrigerant circuit.

So as a thought exercise let’s consider a typical 2-ton, straight cool, TXV, residential system and think through what happens when we alter airflow and what impacts that has on the system.

First let’s establish that it is the molecules or “stuff” that makes up air that contains and can move heat energy. While we often talk in terms of CFM (Cubic Feet Per Minute) that is a measurement of volume rather than mass. The air conditioner cares about the mass flow of air over the coil not the volume flow which is why more airflow in CFM is required in high altitudes where air density is lower.

So when we speak in terms of CFM/ton (Cubic feet of air per ton of cooling) that is referring to typical air at sea level and needs to be adjusted as air density changes.

The 400 CFM/ton design has been used for years and it is an adequate baseline airflow for many types of equipment and in many moderate climate zones. There are several issues with the 400 CFM/ton rule where it needs to be adjusted.

How The Evaporator “Absorbs” Heat

In my refrigeration circuit basics training I call the evaporator coil the “heat absorber” because its end goal is to take heat from where you don’t want it and move it somewhere else.

The heat gained in the evaporator in this scenario comes from the indoor air being moved over the evaporator coil. The air is warmer than the refrigerant so heat leaves the air as it impacts the tubing and fins of the coil because “hot goes to cold”.

When the temperature of the coil is below the dew-point of the air moving over it there is also a transfer of latent energy from the air as some of the water vapor in the air condenses to liquid water (condensate) on the evaporator coil. This latent heat transfer does not result in colder air but rather lower moisture content in the air, this heat does impact the evaporator in the same way as sensible heat as it is added to total heat picked up in the evaporator.

We use the term “coil TD” a bit differently in different parts of the industry but in air conditioning it is the difference between the air temperature of the return air entering the evaporator coil and the saturated suction temperature often called the “coil temperature”. In typical 400 CFM/ton applications this difference will be around 35° with a higher number meaning a colder coil and a lower number meaning a warmer coil. There are several things that can impact coil TD including refrigerant mass flow rate (how much refrigerant the compressor is moving), metering device performance, return air dew point (moisture content) and most commonly…. airflow.

What Happens When Airflow is Decreased?

We all know that if you have far too little airflow a system can freeze up when the coil temperature drops below 32°F. The other consequence of dropping airflow is lower overall sensible capacity and therefore a drop in EER and SEER rating. On the positive side in humid climates, a system with lower airflow will remove more water from the air which can be desirable.