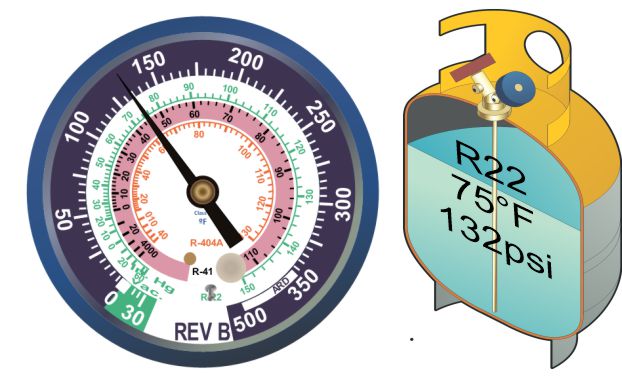 Saturation and the Pressure-Temperature Relationship

In HVAC systems, liquid and vapor will exist at the same time and place, we call this saturation or at saturation. Phase changes occur in the evaporator and condenser, so these are spots where liquid and vapor coexist while the system is running.

However, the refrigerant must be at its saturation point. Saturation can be confusing, so this article will explain saturation and how a P-T chart fits into the concept. It’ll also teach you how to use your P-T chart to determine superheat and subcooling.

When something is saturated, it’s full of something else. For example, clothes become saturated with water in a washing machine.

In physics, liquids at saturation are “full” of kinetic energy. When this happens, they’ve reached their boiling point. The “boiling point” can be a somewhat misleading term, though.

Liquids at saturation have reached their boiling point, but they don’t have to boil to evaporate. Temperature is only a measure of average molecular activity. Some individual molecules have a lot more kinetic energy than others. These molecules will escape into the air without boiling. That’s why puddles don’t have to boil for water to evaporate from them.

At some point, the vessel’s pressure will exceed the liquid’s vapor pressure. Boiling will stop when this happens. When boiling stops within a closed system, the temperature and pressure stop increasing.

The P-T chart is a vital yet often overlooked tool. P-T charts use the pressure-temperature relationship to help you determine the refrigerant’s pressure at a given saturation temperature.

You can use this chart to determine the pressure when you read a temperature or vice versa. Refrigerants exist in vapor and liquid states simultaneously in the evaporator and condenser. The coils add or remove heat, which allows phase changes to occur. Before a phase change can take place, the refrigerant must reach saturation.

Remember, this chart is only accurate when liquid and vapor are present at the same time and place. The refrigerant has to be a certain temperature and pressure because it exists in both gas and liquid phases within a closed system.

Keep in mind many of us won’t use the chart itself very often. We will use apps like Danfoss RefTools or Measurequick to give us PT data or we will simply look at our gauge which will have a PT chart for various common refrigerants printed right onto the gauge face. If the gauge shown above was connected to an R410a system we would see the pressure is about 134 PSIG which points at about 46°F on the R410a (pink) temperature scale printed on the face. If it were R22 the green scale would show us 75°F for the very same pressure.

The temperature deviates from the P-T relationship outside the evaporator and condenser. In these cases, superheating or subcooling has occurred.

You can determine the superheat or subcooling by finding the difference between the sensible and saturated temperatures at a given pressure. That’s where your P-T card or P-T app comes in handy.

You’ll find saturation temperatures inside the evaporator and condenser coils. You can take sensible temperatures anywhere in the liquid or vapor lines.

To determine the superheat in the vapor / suction line, locate a specific point on the line. This point can be the coil outlet or anywhere else between the evaporator and the compressor depending on the purpose of the measrement. Take a sensible temperature measurement of the line and pressure reading. Find the pressure on the P-T card and look for the corresponding saturated temperature. Find the difference between the measured sensible and saturated temperatures. The tempertue increase from saturated to sensible is the superheat.

The same principle applies to subcooled liquid in the liquid line. Take a sensible temperature and pressure reading on the liquid line. Find the pressure on your P-T card and locate the corresponding saturated temperature. The difference is the subcooling amount and it will always be a lower measured line temperature than saturation when the refrigerant is fully liquid.

The P-T relationship makes your job a lot easier. Still, it only exists under specific conditions. It’s a good idea to understand those conditions fully. That way, you can use the P-T chart to help you determine superheat and subcooling conditions as well as evaporator and condensing temperatures. It can also help us identify what type of refrigerant we have in a tank or if that refrigerant may be cross-contaminated.

This knowledge is one of the basic building blocks of refrigerant circuit understanding and they start with understanding the P-T relationship and saturation.