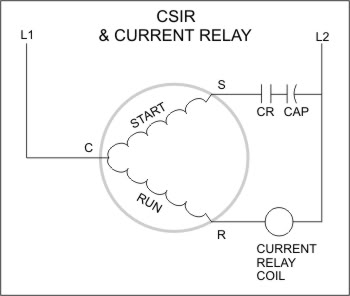 The name “start winding” is an antiquated term for the single phase residential industry.

It’sa left over from the days when CSIR (Capacitor start, induction run) motors were still used commonly. In a CSIR motor the start relay removes the start winding when the motor gets near full speed and then the motor would “run” completely on one winding (like the diagram shown above).

I wish we would call the run winding the “primary” winding and the start winding the “auxilliary” or “supplemental”… But alas my last name is Orr not Westinghouse, Tesla or Edison so what do I know…

If you were to check the amperage on one of these CSIR motors on the Start winding (not common) you would see a current for the first few hundred milliseconds and then the relay would open and take the “start” winding out of the circuit completely. So after the first split second, you would have zero amps on the start winding.

This is NOT how a modern single phase compressor works.

For a modern single phase A/C system the motors are primarily PSC (Permanent split capacitor) with a run capacitor that stays in the circuit all the time and connects between the start terminal and the same line of power that feeds run.

Go ahead and measure inrush current on the wire that connects to “Herm” on a dual run capacitor on the next system you work on that has a run capacitor and no start capacitor. In most cases, your meter won’t pickup inrush at all on the start winding. Even if you do pick up a reading it will be the same as when the compressor is running…. or maybe even a little higher as the compressor gets up to speed and back EMF kicks in (more about that later).

Absolutely! a motor will draw higher amperage at startup when measured on Run or Common. This is because the run and common on a single phase motor are connected “across the line” from one side of the power supply to the other. In the run winding, the current is regulated only by the resistance in the run winding.

When that run winding first gets hit with the full applied voltage it is really nothing but a heater. If you take an ohm reading on a compressor and try to work Ohm’s to calculate the current you will notice that it is VERY high. This is because the majority of the electrical impedance (total resistance) is generated once the motor starts spinning and the magnetic field inside the motor starts to push back against the magnetic field being generated by the current moving through the windings.

This can, does and MUST occur on the run winding. The amperage will jump way up to the LRA (locked rotor amps) at first until the motor gets up to speed and then it will drop back down to the RLA (run load amps)… But only on the run winding when the unit has a run capacitor only.

The start winding has that darn membrane in the way (the run capacitor) and that membrane limits how much current can go in and out of that start winding.

A failed run capacitor causes stress on the RUN WINDING because now the run winding will keep drawing LRA and going out on thermal overload until that capacitor gets replaced or the overload or run winding fails.

The start winding will just sit there open with no current load whatsoever.

Before you say it (because I know some of you are thinking it), What happens if the run capacitor fails SHORTED? While that may be a theoretical possibility it is not possible in a practical sense because of the way that metal film run capacitors are made. the metallic coating on the internal windings is so thin that it vaporizes whenever there is a high current event like a short circuit. The possibility of a modern HVAC run capacitor actually staying shorted is slim to none.

Part #3 is coming soon…. we haven’t even gotten to start capacitors yet