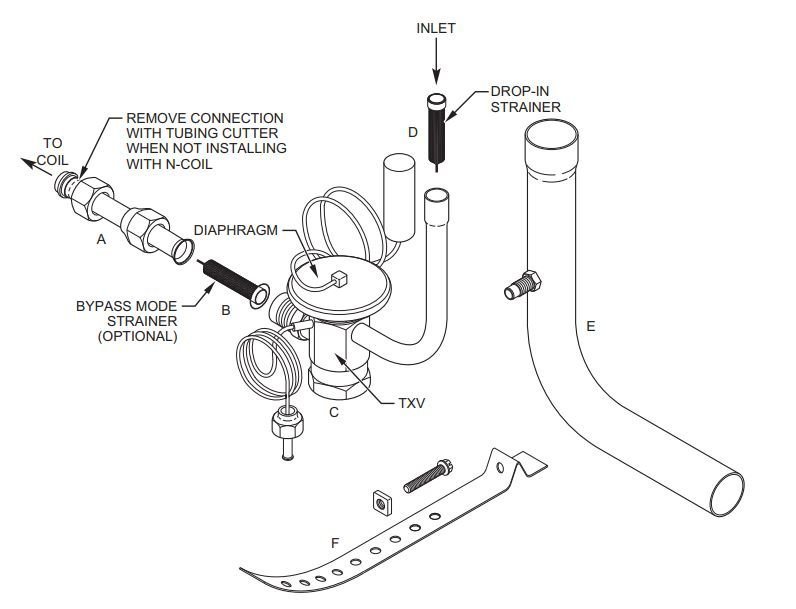 There is a lot of misunderstanding about the HSO (hard shut off) or “non-bleed” TXV (thermostat expansion valve) and what makes it shut off, why it exists and how it “magically” opens.

Once you understand the forces inside the valve it is quite simple and obvious and sadly devoid of any magic.

The TXV has two primary closing forces, namely the evaporator pressure via the internal or external equalizer depending on the valve type and the spring pressure. It also has one opening force, the bulb / power head pressure. 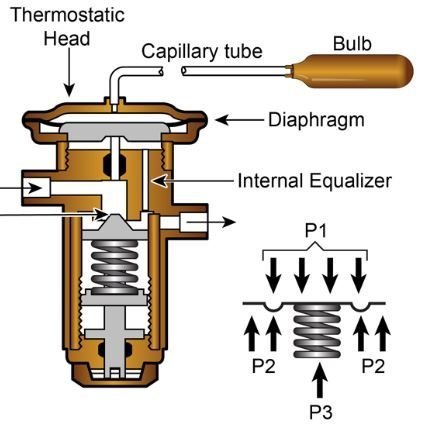 These two forces balance during operation with the spring adding some additional force so that the superheat can be set and maintained by the valve (to some degree). Without the pressure of the superheat spring assisting the external equalizer the pressures in the bulb and pressure in the evaporator will tend to exert the same force and therefore fail to modulate and control superheat… which by its very nature means that the temperature of the suction line needs to be greater than the saturation pressure in the coil.

This occurs while running because the refrigerant is dynamically moving and as the valve adjusts the coil pressures and temperature also change until a balance of the three forces is achieved and the valve settles in on it’s designed superheat.

What is the Superheat When The System is Off?

This is not a trick question… what is the superheat of a system when it isn’t running? the answer is ZERO.

When the compressor goes off and the refrigerant becomes static (still) instead of dynamic (moving) the pressures in the evaporator coil begin to rise as the liquid and vapor in the coil reach equilibrium with the temperature until zero superheat (also called saturation) is reached.

So what does the valve do? It CLOSES.

It doesn’t need to be a SPECIAL hard shut off valve… it just does what it is designed to do and when you look at the forces that make it open and close it makes complete sense.

When the refrigerant stops flowing and the coil starts to warm up and the coil pressure starts to go up both the bulb and external equalizer forces rise equally but without refrigerant flow driven by the compressor pulling down the pressure in the suction line the valve goes shut due to the spring pressure.

In other words… unless a TXV is specifically DESIGNED not to close all the way it stands to reason that it will start closing as soon as the compressor goes off and eventually shut completely once the evaporator pressure rises to the point that the saturated pressure + spring pressure is greater than the bulb saturated temperature.

Clear as mud? Let me describe it in two practical ways you may have observed.

When I pressurize a new split system with nitrogen I like to feed it in the liquid line and watch the suction rise to make sure there are no restrictions in the system and to hopefully force any contaminants into the filter/drier or screen rather than the valve.

I always noticed that on a TXV system I could only pressurize it so far before the suction pressure stopped increasing. It always worked fine up to a certain point but once I got somewhere between 200 and 300 PSIG on an R410a system the suction would just stop rising….

Have you ever noticed that? Ever wonder why?

Take a look at a PT chart and you will notice that the pressure that it “shuts off” at will often be right around the saturation temperature of the refrigerant the valve is designed for at the current indoor temperature. 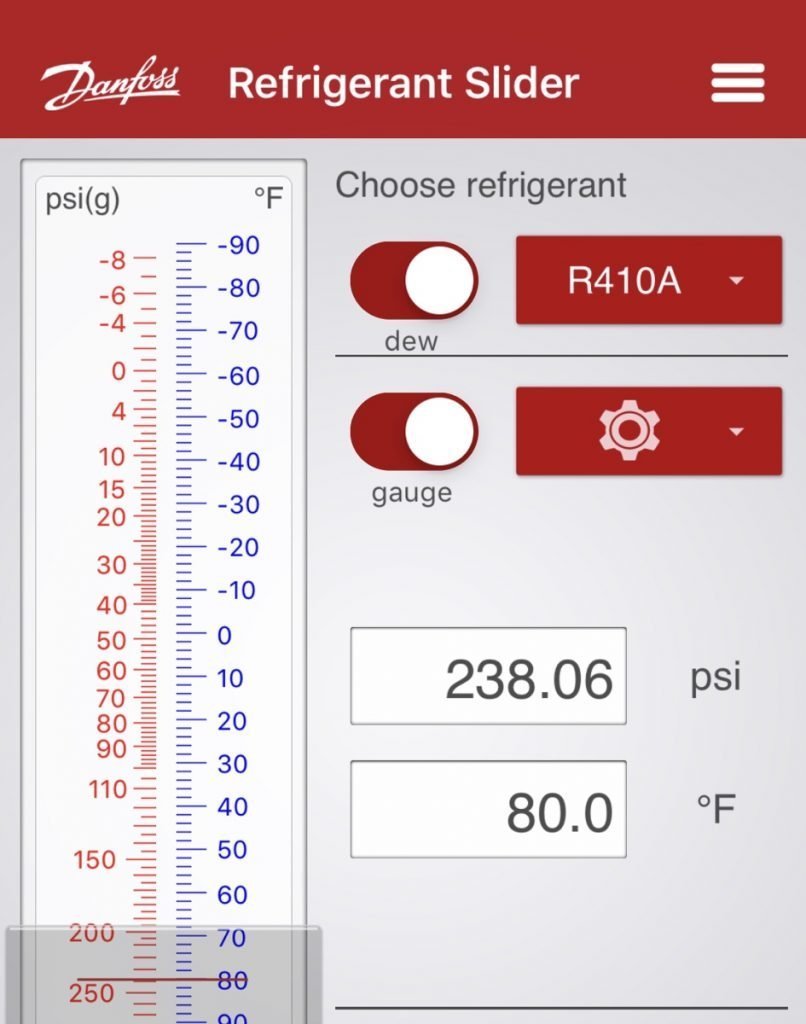 Vacuum on the Suction Side 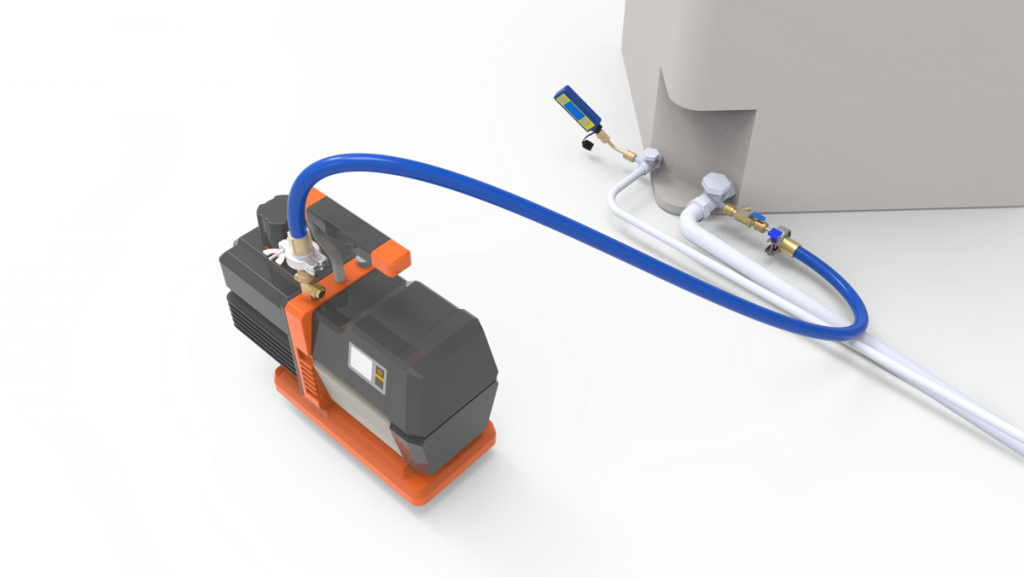 When we first started advocating for pulling a vacuum with one hose on the suction side with the vacuum gauge on the liquid line there were many who thought it wouldn’t work because of “hard shut off TXVs”.

Now, this is true of closed solenoids or shut ELECTRONIC expansion valves but NOT of a non-bleed TXV… Why you might ask?

Think about the forces again.

When we pull a vacuum we are DROPPING pressure, in this case on the suction line. When we decrease suction line pressure we are also decreasing the external equalizer force which closes the valve. When you decrease a closing force you open the valve further so pulling a vacuum in this way actually drives the valve open and we have shown time and time again that for residential new installs and changeouts it is a very effective method of pulling a deep vacuum.

What is Hard Shut Off Good For?

The advantage of a non-bleed TXV is simple, it helps reduce refrigerant migration and flooded starts. By closing soon after the system cycles off it keeps most of the refrigerant in the condenser coil which prevents it from gathering in the compressor or dumping down the suction when the system comes on. Since compressors can be easily damaged by flood back the non-bleed TXV is a good thing for that reason.

The only thing that causes trouble is the fact that some compressors struggle to start with more pressure on the discharge side and less on the suction side, this is why some manufacturers require hard start gear when an HSO / non-bleed valve is in place.