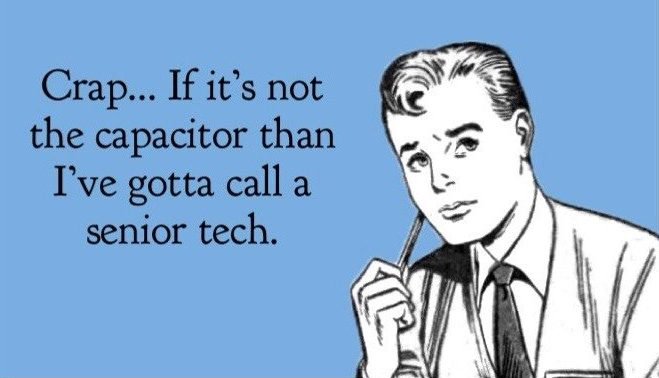 For years I’ve worked with and around people who view work, problems and goals differently than I do. I’ve often told my wife that I have an issue managing and leading administrators, salespeople and other inside staff because I just don’t communicate in a way they seem to like.

It’s been 20 years in the trade now and almost 15 in business before I’ve come to a conclusion.

I prefer working with technicians

Before you call all the dispatchers, accountants and warehouse staff together with pitchforks and Molotov cocktails… hear me out

What is a Technician?

We aren’t going to reach for a dictionary to define what a technician is, we are going with the “Potter Stewart” method of “I know it when I see it” and I’m sure you do as well.

Now, there are many people with the title of “technician” on their LinkedIn account that don’t meet my smell test and there are many more who would never consider that title who are hard core technician in my book.

A Technician Wants to Understand

There is a big difference between knowing what to do and understanding. I was standing in line at the local fast food joint the other day and I was noticing all the teenagers moving around behind the counter, looking up at monitors,, hitting buttons, filling drinks and wrapping burgers.

They all knew what to do to get me my food at Mickey D’s but put them in front of some raw ingredients in a home kitchen and do they UNDERSTAND cooking? No, of course they don’t.

If you handed them a hot-dog and they had never made one before they would look at you, blink and then ask some version of “how do I cook this?”. They will keep standing there until someone gives the answer and in their mind that is how cooking food works. Someone tells you what to do and then you do it the way you are told, this is how you cook and this is how having a job works in their world.

For the technicians out there, is that how you learned? is that how you solve problems? The idea that we would wait until someone tells us how to do everything before we do it is laughable. Technicians found how the why and how of how things work in order make sense of solving problems, even problems they have never encountered before.

A true technician may be light hearted or severe, introverted or extroverted but they all take their work very seriously. When they put their name on something it means something and they never want it to be said of them that they were careless, lazy or sloppy in their work. In a technicians mind their work is nobody else’s responsibility and they want to get it right the first time.

A Technician Doesn’t Need to be Affirmed Continuously

I’ve noticed this new phenomenon where workers expect not only to be recognized for their achievements above and beyond the usual but to get verbal affirmation just for the regular execution of their job. It’s as if  every job task completed without a serious mistake is a huge accomplishment and requires commentary.

Technicians get satisfaction from a job well done, they pursue excellence for excellence own sake, not for the accolades of others ESPECIALLY when it’s given because its expected.

A Technician Goes Home When the Days Work is Done

Technicians don’t go home until their work is done. That doesn’t mean that they always work crazy hours but it does mean that they don’t start something that they aren’t going to see through to completion, even if that means handing it off to someone else.

I’ve had numerous interactions with staff who were getting behind in their core tasks because they “just don’t have enough time”. A technician doesn’t get behind for long because that just isn’t an option for them. There is another job to do and the only way to keep from drowning is to get better and more efficient at their work. If a technician is given far more than they can do then they talk to the dispatcher or manager to get help BEFORE they get stuck because just leaving it undone is off the table.

Oh no! you have a problem that’s hard to figure out?

Technicians LIVE for the hard problems, the challenges they’ve never faced before, the once in lifetime issue.

Because to a technician work isn’t about showing up, doing the least possible work, staying comfortable and heading home a few minutes early if they can get away with it. Work is about fixing real problems, hard problems. Leaving everything you work on working better than when you started. Finding those hidden problems that everyone else missed and bringing harmony to discord.

To a technician every problem has a solution and if you aren’t working on the solution then WHY ARE YOU EVEN TALKING RIGHT NOW?

Technicians HATE Having Their Time Wasted

Standing around and shooting the breeze is OK every once and a while but to a technician it gets old real quick. A technician understands that the real work that pays the bills doesn’t get done by talking around the water cooler and the longer you put it off the tougher the day is going to be.

Technicians do not practice wasteful, non-sense processes without speaking up, even if it was their bosses idea or pet project. If a technician finds they are working at a place that wastes their time on useless reports that nobody ever looks at or double entry data procedures that has them writing more than they are working they will usually move on pretty quick.

Don’t ask a technician to train a slacker or suffer a fool in their work space, a technician would fire their own grandma if they slow them down and cause issues.

Technicians Don’t Need Emotional Support to Do Their Job

I’ve overheard people say that they “don’t feel supported” in their jobs on more occasion than once. If that means you aren’t being given the time and tools to deliver on what the company is requiring or promising than I guess I understand that. If it means you need someone to call and talk you through problems every-time you feel frustrated or that you need to talk to someone whenever a customer gets cranky then the technician in me says

Buck up Buttercup. It isn’t supposed to be easy and you won’t always “feel good” about every job or interaction.

A technician is an adult who doesn’t need someone to make them feel good about life in order to get the job done. So much of what people call “communication” is just empty talk designed to make people feel “heard” and that they could “Speak their piece”.

This doesn’t mean you need to be rude or nasty but what is with all this talking and meetings and talking about meetings!!

You know what makes a technician feel better? GETTING WORK DONE

Technicians Hate Failing But Accept That It’s Part of Growing

There are two common workplace responses to mistakes and failures when they come to light. The most common is to make excuses and place blame, the technician figures out what went wrong and learns ways to prevent it in the future to the extent it is preventable.

It always cracks me up when something breaks and the customer acts totally stunned and says something like “That shouldn’t happen! This system is only _____ years old”as if someone must account for this horrible injustice.

Yes and war and sickness, crime and decay ALSO shouldn’t happen but they do every day, technicians realize this and embrace it as part of their calling to set things right rather than wallowing in blame and excuses.

If a technician is really stuck and need some expert advice then they MAY call another technician but only after they have read everything they can on the problem they are facing and took a solid shot at Google or any other online resources they have. They don’t call other technicians just because it’s “easier to call” and “I just wanted to talk”. If you want to talk to another tech when you are both on the way home to catch up on the events of the day then OK (we used to do this all the time in the days of radio dispatch), but technical questions are for specific technical answers not for chit chat.

I realized that I am not going to stop preferring technicians.

So rather than trying to change that about myself, I’m going to work to fill my business with people who have a technicians mindset even if their job title isn’t one of a technician. The best dispatchers, receptionists, permit techs, parts counter staff, warehouse managers and installers I have known still have this “technician” mindset even though they may never work on a piece of HVAC equipment.

From now on I’m looking for dispatch technicians, sales technicians and warehouse sweeper technicians (you get the point). Sure a successful workplace takes all types of personalities and skill sets and if you are coming to work to get stuff done and broken stuff fixed then WELCOME. If you want a support group or new friends then may I suggest the Kiwanis club or Elks Lodge (that’s a thing right?).