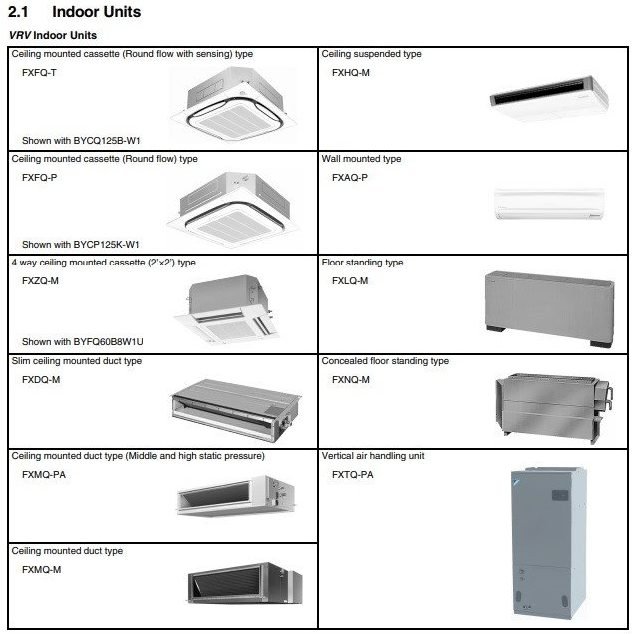 This tech tip is written by experienced tech and VRV specialist Ryan Findley. Thanks Ryan.

This is a quick overview, not a substitute for taking proper manufacturer training

This tech tip is geared towards the mechanic who is fairly new to VRV systems.  As with anything, the ability to install or service anything we first must understand the basic fundamentals.  Even though some VRV systems might feel like a bit of overwhelming, but they still function the same as a standard heat pump.

Note: VRV refers specifically to Daikin and this tech tip is written primarily from a Daikin point of view

First, let’s identify some components.  In a VRV system we have the outdoor units, which are also commonly referred to as modules.  Modules come in various sizes ranging from 6-12 ton in heat pump and 6-10 ton in heat recovery in the VRV 3 line.  VRV 4 ranges from 6-14 tons.  Modules can be combined in tandem up to a total of 3 outdoor modules.

Indoor units (or fan coils) come in many different types, but the most common ones used are the ceiling cassette and the ducted units.

Refnets are a Y type fitting designed to provide equal flow to both the main piping continuing on and also the branch piping that is taking off of the main.  Refnet installation is critical.  Follow manufacturers recommended install practices of keeping the angle of the refnet below 15 degrees for outdoor unit piping and 30 degrees for indoor piping.  To visually show what the adverse effects of improper installation, see this video.

Branch selector boxes or BS boxes for short are only used in heat recovery applications.  BS boxes will have the 3 pipes coming from the outdoor units piped directly to them.  They are made up of solenoids and EEVS.  The fan coils determine the mode of operation but the actual change of the mode of operation occurs in the bs box.

VRV systems are basically one giant communicating residential variable speed heat pump.  Information is shared from the fan coils to the outdoor units across a daisy chain of communication wiring.  The wire should be 18/2 non-shielded stranded.  The system should also be wired as shown in your submittal documents from your sales engineer.

Polyvinylether oil is used in the VRV product line.  It’s used because of its outstanding miscibility at low refrigerant velocities.  It’s noteworthy that PVE is more hygroscopic than POE oil is. The big difference between the two is that PVE can be dehydrated by pulling a vacuum on it whereas POE will not. Another difference is when PVE interacts with moisture, it doesn’t produce acids via hydrolysis.  If PVE is exposed to moisture, it turns the oil to sludge.

A heat pump system operates with only 2 pipes running between the outdoor and indoor units.  One line is always a liquid line whereas the other line is either hot gas or suction gas.  Mode of operation is determined by a master stat (designated at startup).  The master stat is the only one in the system who has the ability to change the mode of operation.  There’s a more complicated way to control these if you have an iTouch Manager, which we will discuss later.  Heat recovery uses a 3 pipe setup and bs boxes.  The 3 pipes consist of a liquid line, suction line, and a dual high pressure/low-pressure line.  When the machine is in full heating mode, the dual gas line will have discharge gas going down it.  The liquid line remains the liquid line and the suction pipe is not being used.  In full cooling mode, the dual gas line turns into an additional suction line.  The suction line and liquid line act as it would in a standard a/c. Parallel operation is when there is a demand for heating and cooling at the same time.  In this mode, the dual gas line will be in heating mode.

Differences between VRV 3 and VRV 4

There are a few big differences between the two product lines.  First is VRV 3 uses a crossover line that runs between all of the modules, if there are more than one.  VRV 4 does not have that.  VRV 3 has 1 inverter compressor and 1 standard compressor (in modules that have more than 1 compressor).  VRV 4 has 2 inverter compressors, again if it’s a module that has more than one compressor. Both product lines have different inverter boards and different cabinets.  VRV 4 also has a split outdoor heat exchanger that allows ½ of the coil to be in one mode of operation while the other ½ could be in another mode of operation.  VRV  4 inverter boards are cooled by subcooled refrigerant that runs on the back of the heat sync.  VRV 3 inverter boards are air cooled from the inside of the cabinet near the outdoor fan motor.

Filter driers are not used unless there is burnout of a compressor. If a burnout cleanup is required, follow manufacturers recommended clean up procedure.