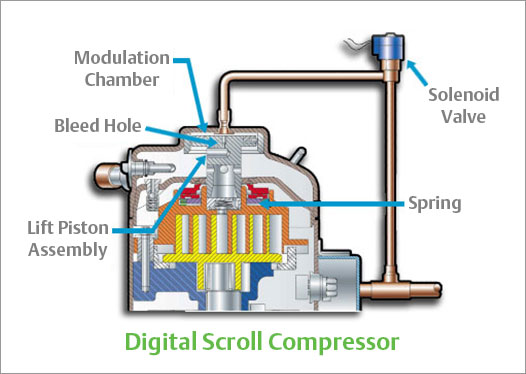 So much of what manufacturers do with modern compressors seeks to make them more efficient with better ability to load match, hopefully without reducing ruggedness. The Copeland Scroll Digital™ or Digital Scroll is one design that has become very popular due to its simplicity and versatility.

But before we go further, let’s define some terms

These are the forces in line with the axis or center of the scroll, the “up and down” force that holds the stationary top plate together with the oscillating bottom plate.

These are the forces in line with the radius of the scroll plates, the “side to side” forces that keep the two plates in contact with one another.

In other words, the scroll plates are forced together top to bottom (Axial) and side to side (Radial) but if something goes wrong they can separate to help prevent damage.

A Copeland Digital Scroll uses the axial (up and down) compliance to intentionally load (full capacity) and unload the compressor on and off for various periods of time to match compressor capacity to the equipment load.

These digital scrolls have a solenoid that allows fully loaded operation like usual when it’s de-energized and allows for fully unloaded operation when energized. By varying the loaded time to unloaded time the compressor can vary its output over a period of time and provide excellent capacity control. Technicians in the field may hear this loading and unloading and think that something is going wrong because it does SOUND quite unusual to the trained ear.

My brother was working on a large rooftop unit and heard it unloading so he put his ammeter in the compressor and observed and consistent increase and decrease of compressor amperage. Sure enough, it was a Copeland digital scroll.