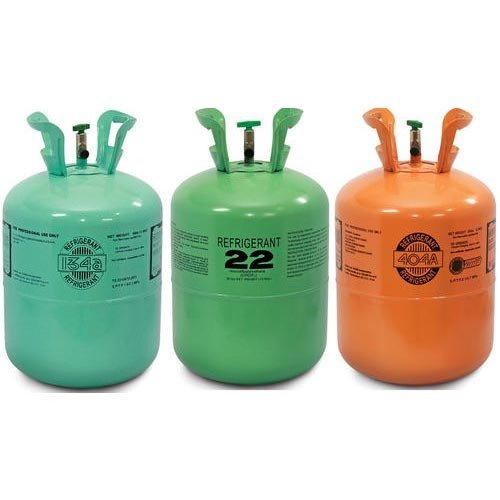 A refrigerant is anything we use to move heat from one place to another using the compression refrigeration circuit, however, the history of refrigerants and the different kinds is quite diverse and interesting.

Have you ever noticed how your skin feels cool after you apply rubbing alcohol to it? For a long time scientists and inventors experimented with substances that evaporated easily at atmospheric pressure like ether and alcohol, they noticed that these substances cooled the surface they left when they evaporated away. It was understood that substances remove heat as they boil (change from liquid to vapor) because that is one way our bodies reject heat while sweating. As the sweat evaporates it removes heat from our skin leaving us cooler.

This is known as an “open” process, the alcohol, ether or sweat leave as it cools so you always need more to keep the process going. The trick was to create a process that could be done over and over without losing the “refrigerant” to the atmosphere.

A physician named John Gorrie built one of the first compression refrigeration machines and it used air as the refrigerant. By compressing the air it would increase in temperature and heat could be rejected out of it, he would then “rarify” or depressurize the air which would drop the temperature and allow heat to be absorbed into the air from the water and could… eventually… produce ice.

There were several issues with Dr. Gorrie’s design, one big issue was that while he was using compression and expansion he wasn’t making use of the power of evaporation to greatly increase the amount of heat that could be moved.

It wasn’t long before others began using refrigerants like ammonia, CO2, sulfur dioxide and methyl chloride using the same compressing and expanding that Dr. Gorrie used but with the added benefit of boiling (evaporating) the refrigerant in the evaporator to absorb a maximum amount of heat as well as the change back to liquid (condensing) in the condenser.

As times have progressed refrigerants have changed in order to make them more safe for humans and for the environment. Nowadays refrigerants and refrigerant handling in the USA are regulated by the EPA Section 608. In order to legally handle and service air conditioning and refrigeration in the USA you need to pass the EPA 608 exam and carry the certification card.

So what makes a good refrigerant?

Because we have seen increased environmental regulations over the last 25 years there has been a push to find good refrigerants even if it means going into the flammable and toxic spectrum.

Thankfully, refrigerants are well marked and so long as we pay attention and follow best practices there shouldn’t be any issues.

The markings are pretty simple

A refrigerants have low toxicity

B refrigerants have high toxicity

2L refrigerants are only “mildly” flammable

2 refrigerants are low flammability but higher than 2L

The most common toxic refrigerant is Ammonia and you would generally only find it in old appliances or in large industrial applications.

Propane (R290) is a flammable refrigerant and it is becoming quite popular in small self-contained refrigeration units like vending machines and reach in coolers. These propane units will be very clearly marked and should be handled with extreme caution, especially when electrical sparks or open flame are or could be present.