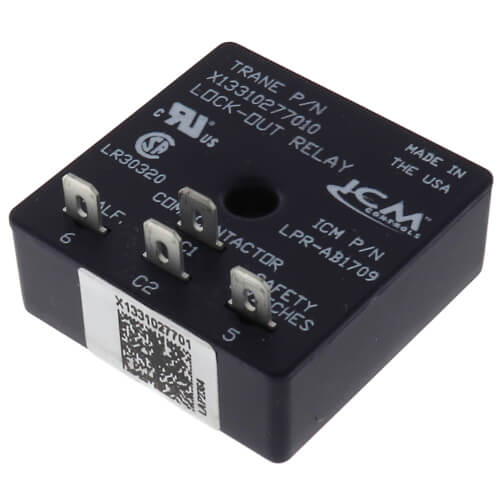 Educators love lockout relays and we also love pretending you will still see them out in the field all the time. Sometimes I have to look myself in the mirror in the morning and sadly repeat “lockout relays are dead” several times before the reality sinks in.

before I get the emails… they aren’t COMPLETELY gone but the function of a lockout relay has largely been replaced by electronic controls.

It isn’t that we are ignorant about lockout relays, it’s just that so much of what we know about them isn’t so

In other words, lockout relays are the teenagers of the HVAC trade – We “just don’t understand them and what they are going through nowadays DAD!”

The Legacy of “Path of least Resistance” 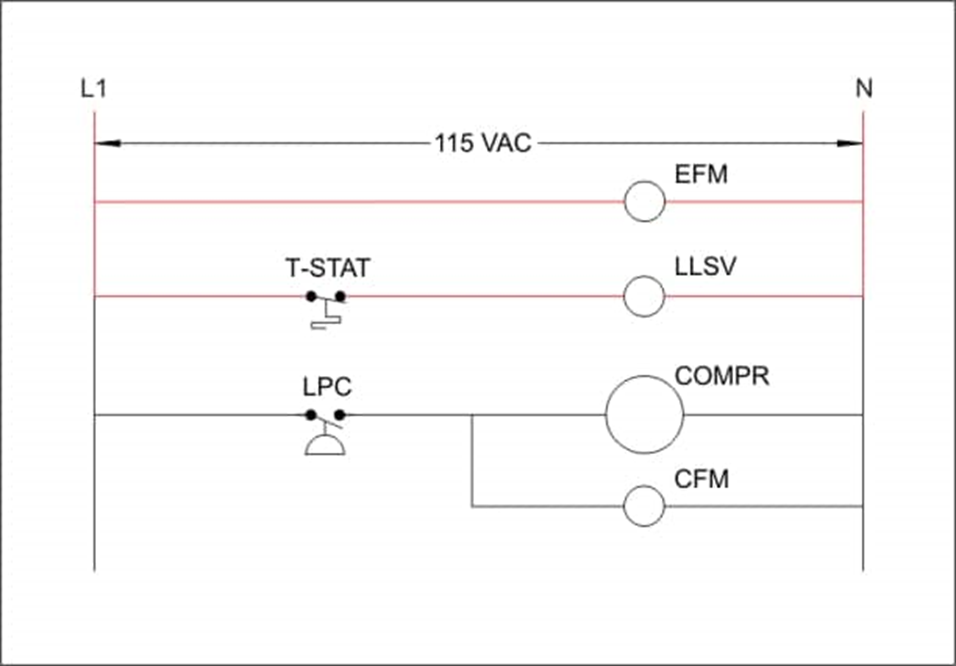 Take a look at this very simple wiring diagram. Does the electricity ONLY follow the path of least resistance from left to right (L1 to N)?

Of course not… if it did only one of the loads shown compressor, condenser fan, evaporator fan motor or liquid line solenoid could work at once.

If this were true in real life your compressor would be the only one that would run on every air conditioning condensing unit you ever worked on, because the run winding on the compressor is the lowest resistance path on the unit.

What people could mean by saying “electricity takes the path of least resistance” is to say that more electrons move (higher current) on paths of lower resistance. This is a true statement and demonstrated clearly in ohms law. Because Volts = Amps x Resistance a path of lower resistance will result in higher amperage if the voltage remains the same.

The problem occurs when teachers use a lockout relay as PROOF that electricity takes the path of least resistance, and this, along with generally helping folks understand the lockout relay, is the reason for this article.

What a Lockout Relay Does

The purpose of the lockout relay is to keep the compressor off when there is a significant fault EVEN if the fault condition goes back to normal. For example, if a high-pressure switch opens the lockout relay can keep the system off even once that switch closes again.

Quite simply a lockout relay is an old-school way to keep a compressor or other critical component “locked out” so it doesn’t ruin itself slamming on and off when safeties open and close.

It’s exactly how and why this strategy works that often leads to misinformation and misunderstanding.

It’s no secret that I don’t like math and I don’t like showing math on tech tips because it causes instantaneous narcolepsy from most technicians. If you know how to calculate voltage drop in series circuits then this exercise will be simple and won’t require you to trust me at all.

NOTE: ALL THE NUMBERS SHOWN IN VOLTS AND OHMS ARE MADE INTO VERY ROUND NUMBERS FOR SIMPLICITY – THESE ARENT WHAT YOU WILL MEASURE IN REAL LIFE

We aren’t used to working with series circuits so it’s easy to get confused but the easiest way to understand them is to remember that the voltage drop between any two points in a circuit is equal to the amount of resistance between those two points compared to the total circuit resistance.

But now let’s say one of the loads has 9X as much resistance as the other – It would see a proportionally greater voltage drop across it than the other. This can be called voltage drop or it could be called applied voltage, either way, it is the voltage that a particular load is “seeing”.

In other words, in a series circuit, the greater the resistance a particular load has the greater the voltage that load will get in relation to the other loads in series with it.

Many people will explain the lockout relay circuit like this. When the relay and safety contacts are closed the path of least resistance is through the safeties and the contactor coil so the current takes that low resistance path. When any of the safety switches open the current is then FORCED to go through the lockout relay coil because it is the path of least resistance which then causes the lockout contacts to go open keeping the contactor coil locked out.

Why is this the incorrect answer?

How the Lockout relay works

The lockout relay coil is a high resistance coil wired in series with the contactor coil but in parallel with the safety switches.

In this case, let’s imagine the high-pressure switch opens. Now the only path is through the lockout relay and the compressor contactor in series causing the total circuit resistance to go up to 100 ohms, this 10x increase will ALSO result in a 10X DECREASE in total circuit current (amperage).

Now 90 ohms of resistance are in the lockout relay coil and 9.9 ohms in the compressor contactor coil with 0.1 ohms occurring elsewhere in the wires.

It is actually understandable why people say “Electricity takes the path of least resistance” because they see circuits like this one and that makes sense. I would just prefer a phrase like “Electricity takes all paths between points of potential difference with a current proportional to the potential difference and the resistance according to the units laid out in Ohms law…..”

I have no clue why my version hasn’t caught on 😉