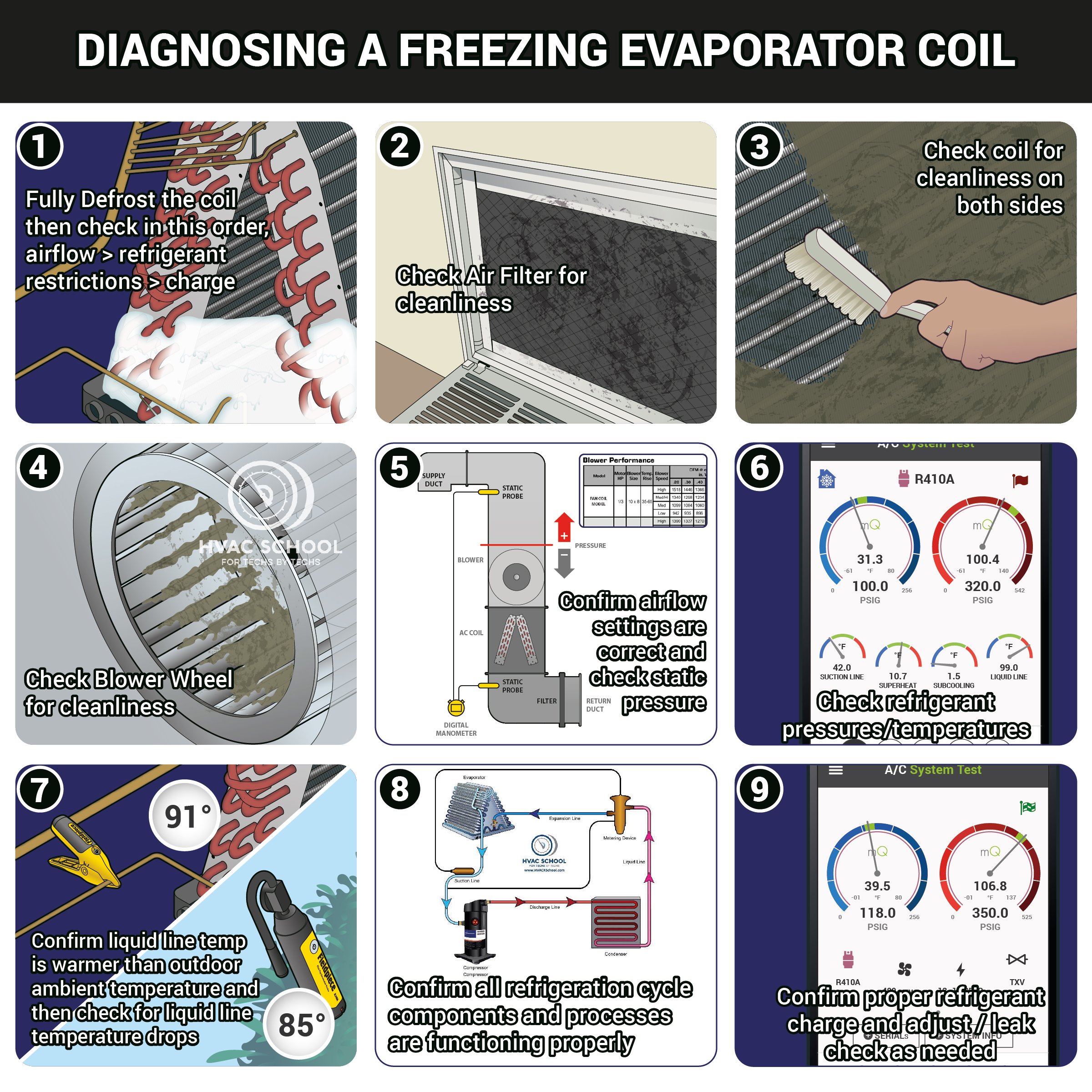 Let’s Start with the basics.

Water freezes at 32° Fahrenheit and 0° Celsius at sea level and atmospheric pressure. When any surface is below that temperature, and the air around it contains moisture, ice/frost will begin to form. In some situations, ice is to be expected, such as in refrigeration evaporators and exposed portions of the refrigeration suction line and the metering device outlet in refrigeration applications. Frost and freezing are also likely in heat pumps operating in heat mode. The outdoor coil on a heat pump becomes the evaporator coil, and during low outdoor ambient conditions, it is expected that the outdoor coil will eventually freeze and require defrost.

The reason that frost/ice is inevitable in some applications is just due to the laws of thermodynamics (moving heat). To get heat from one place to another you need to have a difference in temperature. So inside of a freezer where you hope to get the box temperature to 0°F  the coil temperature needs to be BELOW 0° to transfer heat out of the freezer and into the coil and then down the suction line to the compressor. If you have a freezer with a design coil temperature difference of 10° and a design superheat of 8° the coil will be at -10°F and the suction temperature at the evaporator outlet will be -2°F.

On a heat pump running in heat mode, you will commonly find an evaporator (outdoor coil) that runs 20° – 30° colder than the outdoor temperature. This means that if it is 30° outside the outdoor coil temperature could easily be 0°F. In these cases, ice is normal and periodic defrost is expected and required.

Some systems we work on and install will freeze. Air conditioning is not one of them.

The ice buildup always starts in the evaporator and works it’s way outside. If you have a frozen compressor, you have a frozen evaporator. When you find a frozen system, take your time and get it fully defrosted. Take care to manage the ice melt water and keep it away from motors and boards where it can cause damage and a shock hazard. Some towels and a shopvac are great to have handy when defrosting a unit. When possible allow it to defrost slowly and naturally to prevent damage.

So what circumstances can result in low coil temperature?

Low load is often equated with low airflow… and it usually is low airflow, but there is a bit more to the story than that.

An air conditioning system has one final design result, one big end goal that we are shooting for. Matching the refrigeration effect to the evaporator load.

That is our mission, and that is the primary reason we measure superheat. Superheat gives us a look at how well we are matching refrigerant flow to heat load. High superheat means evaporator underfeeding; low superheat means overfeeding.

There is an issue though, we could have a correct superheat and still have a coil temperature of under 32°, and this is not acceptable in an air conditioning system. When the coil absorbs less heat than designed the coil temperature and suction pressure drop. In cases where a TXV or EEV is controlling suction superheat the suction pressure will drop even further as the valve attempts to keep the superheat from plummeting.

This is why we must size a system, and it’s ductwork appropriately for one another as well as for the space, climate, and even altitude. If we install a system that requires 1200 CFM of airflow to properly balance the refrigeration effect to the load at 75° design indoor temperature and that system is only receiving 900 CFM of airflow, you run an excellent likelihood of freezing. This is especially true when the outdoor temperature drops or the customer decides to drop the thermostat lower than usual.

Low Refrigerant In the Evaporator

System undercharge or underfeeding due to restricted refrigerant flow (restricted filter driers, plugged screens, failed expansion valves or undersized pistons) can also result in freezing over time. Low refrigerant can result in fewer molecules of refrigerant in the evaporator coil which results in lower coil pressure because the coil contains both saturated liquid at the beginning of the coil as well as superheated vapor towards the end. This type of freezing requires time because less refrigerant in the coil equals less refrigeration (cooling) effect.

If the coil temperature is below 32° in an undercharged situation, the coil will simultaneously build frost as the beginning of the coil after the metering device AND underfeed the coil resulting in high superheat. Over time as the frost builds it will start to block the opening of the coil which blocks airflow and insulates that portion of the coil from airflow which reduces the coil load. Eventually, once the coil is blocked with frost almost all of the load is removed from the coil and you have a low refrigerant issue that LED to a low load issue that resulted in a complete freeze up.

Often once you resolve the charge issue, you may also find another low load issue as well that contributed to the freezing. In many cases when low charge is the cause, the customer will notice the issue before the system is FROZEN SOLID.

If the indoor blower shuts off, the coil temperature will drop. Sometimes a blower motor will have internal issues or controls issues that cause it to shut off periodically. This can cause intermittent freezing that can be hard to diagnose. Checking controls, belts, blower amperage, bearings, and motor temperature can all help in diagnosing these issues. Sometimes leaving an amperage data logger on the motor along with a coil or supply air temperature sensor can give you the ammunition you need to pinpoint an intermittent issue.

When diagnosing a freezing situation don’t jump to conclusions, get all the ice defrosted before making a diagnosis and keep a sharp eye out for airflow and design issues. Freezing is often due to more than one issue combined that act to turn your customer’s air conditioner into an ice machine.