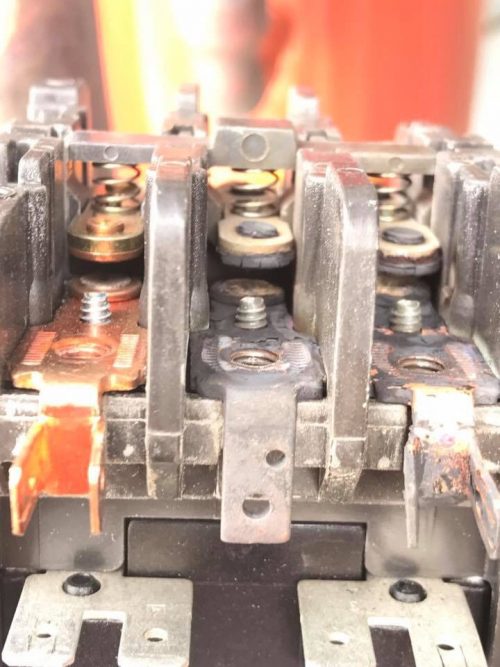 This tip was created by Jason Pinzak and originally posted on the HVAC Technician’s Facebook group. It is reposted here with permission from Jason. Thanks!

Contactors are useful in commercial and industrial applications, particularly for controlling large lighting loads and motors. One of their hallmarks is reliability. However, like any other device, they are not infallible. In most cases, the contactor does not simply wear out from normal use. Usually, the reason for contactor failure is misapplication. That’s why you need to understand the basics of contactors.

When selecting contactors, you’ll use one of two common standards: NEMA or IEC. Both match a contactor with the job it has to do, but they do so in different ways.
The NEMA selection process always results in a choice of a contactor you can use over a broad range of operating conditions. For example, you could use a NEMA Size 5 contactor to run a 50-hp motor operating at 230V or a 200-hp motor at 460V.

Using IEC standards, however, you can size contactors very close to their ultimate capabilities. In many cases, this precision allows you to predict how long they’ll last. For example, an IEC-rated contactor may run a motor that draws 40A at full load. In that duty, it should last for more than two million operations. But, if you used it for consistent jogging and plugging, you’d have to replace it after just a few thousand operations.

Since a contactor should last for years, don’t automatically replace one that fails with an identical unit. Instead, take a few moments to see if there is an obvious problem. A contactor really has only two basic parts: the contacts and the coil. The coil energizes the contactor, moving the contacts into position. The contacts transmit the current from the source to the load. Heat can destroy either of them, so take a good look at both.

Contacts will overheat if they transmit too much current, if they do not close quickly and firmly, or if they open too frequently. Any of these situations will cause significant deterioration of the contact surface and the shape of that surface. Erratic operation and failure will be quick. To check the contacts, just look at them. Some minor pitting (see photos) as well as a black oxide coating is normal, but severe pitting or any melting or deforming of the contact surface is a sure sign of misapplication. Replace contacts with such symptoms.

Coils can overheat if operating voltages are too low or too high; if the contacts fail to open or close because of dirt or misalignment; or if they have suffered physical damage or experienced an electrical short. Coil insulation degrades quickly when it gets too hot. When it degrades, it will short out (and blow a fuse) or just open and stop operating.

To check a coil, measure the ohms across the contactor coil. Infinite resistance means the coil is open. A shorted coil will still often register significant resistance and can be confused with a good coil . If you happen to have a matching contactor nearby, compare the two coils. The shorted coil will usually have significantly lower resistance than the good one but a compromised coil can alos have a higher resistance. If the difference is significant, replace it. Replacing the contacts or coil often means replacing the whole contactor. But no matter what you replace, compare the NEMA or IEC rating with the job the contactor will be doing. If you match it to the application, it should last a long time.

P.S. – Here is another good article on the difference between IEC and NEMA rated contactors