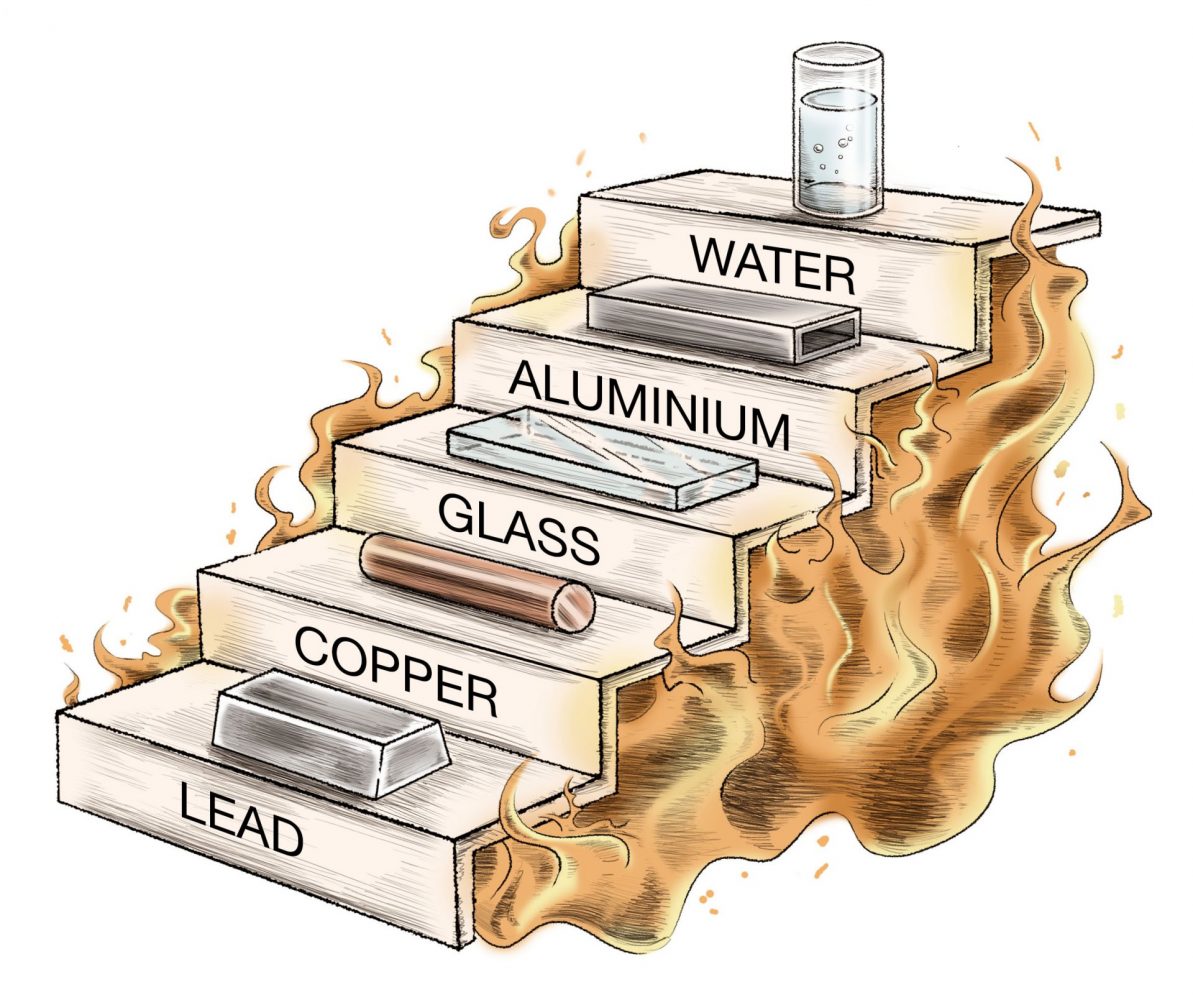 Heat is a byproduct of mechanical energy that presents itself as a temperature increase. French physicist James Prescott Joule aimed to equate heat to mechanical energy. Early experiments used paddle-like structures to stir water within a container and raise its temperature. The paddles would move and agitate the water whenever a mass on a pulley system would fall from a fixed height. Joule evaluated the relationship between the energy he put in and the temperature increase.

He created an equation that multiplies all the variables of potential energy to determine the heat produced (in Joules, J). These variables are mass in kilograms (m), the force of gravity (g = 9.8 m/s2), and height in meters (h).

If a 10 kg mass were to fall 1 meter, then the equation would look like this:

After further experimentation, Joule determined that it takes 4186 Joules to raise the temperature of a kilogram of water by 1° Celsius. This is the coefficient of heat (c) for water.

A Joule (J) is the standard unit of energy named after the previously mentioned physicist, James Prescott Joule. A single calorie is equivalent to 4.186 Joules. Since we often use kilograms to measure the mass of water, it is worth noting that it takes 4186 Joules to increase a single kilogram of water by 1° Celsius.

A British Thermal Unit (BTU) is the amount of heat required to raise the temperature of 1 pound of water from 63° Fahrenheit to 64° Fahrenheit (ΔT = 1° Fahrenheit). Notice that BTUs use the imperial system while calories and Joules use the SI (or metric system). Even though BTUs are not very common internationally, many American heaters and air conditioning units are still rated in BTUs. One BTU per pound Fahrenheit is equal to one calorie per gram Celsius, but one BTU per pound Celsius is equivalent to about 1.8 calories per gram Celsius.

Heat capacity is the ability of an object to store heat. An object’s mass and specific heat primarily influence its heat capacity.

It takes more heat to raise the temperature of an object with a greater mass. Let’s say you have two objects of the same material, but one of them is ten times larger than the other. Intuitively, it would take ten times the amount of heat to raise the larger object’s temperature by the same amount as the smaller object. The larger object can store more heat without increasing the temperature, giving it a higher heat capacity than the smaller object.

Since we know every variable except TF, we are going to solve for TF. To isolate TF, divide both sides of the equation by cm, and add T0 to both sides. The new equation looks like Q/cm + T0 = TF. Divide Q by cm to get the temperature change, and add that quotient to the initial temperature (T0) to get the new temperature (TF). See Figure 2 for a step-by-step visualization of this process.

Figure 2. The step-by-step mathematical process for finding the final temperature after applying 50 BTUs of heat to 5 pounds of water at 15° Celsius.

Whether a solid becomes a liquid or a liquid changes to a gas, phase changes require energy. The added energy changes a substance’s molecular structure. The energy stimulates movement, which reconfigures the molecular bonds. When a solid melts, the vibrations force the molecules to fall away from each other and slide past one another. When a liquid turns into a gas, the molecules’ movements become so fast and powerful that they break free of the liquid and become a gas or vapor.

It takes more energy to cause a phase change than to heat a substance. It takes 1 BTU to heat 1 pound of water, but it takes about 144 BTUs to melt 1 pound of ice completely. Evaporating liquid water takes even more energy; boiling water transforms into water vapor after adding 970 BTUs.

Figure 3. The heat energy applied to water (in BTUs) and the corresponding temperatures. Notice that the temperature stays the same at the melting and boiling points of water. The energy added during these phase changes is latent heat.

Latent heat of fusion is the amount of energy required for a substance to change from a liquid to a solid or vice versa (via freezing or melting). Water’s latent heat of fusion is roughly equivalent to 144 BTUs per pound. Figure 4 shows how to calculate the number of BTUs needed to melt an ice cube that weighs 20 pounds.

The HVAC industry relies on refrigerants to remove heat. Refrigerants are substances that move heat through an HVAC system’s cycle and produce a cooling effect while vaporizing. Refrigerants exist in liquid and gaseous states when they cycle through a unit, so a refrigerant’s specific heat and latent heat of vaporization affect its performance.

*Water is listed at 212 degrees F at 14.7 PSIA rather than a 40-degree evaporator temperature.

Figure 6. The specific heats and latent heats of vaporization of common refrigerants compared to water.

Water may seem like the ideal refrigerant based on the previous information about specific heat and latent heat of vaporization, but it has several drawbacks. Refrigerants come into contact with metals during the refrigeration cycle, so nonreactive refrigerants are best for HVAC systems. Water has oxygen in it, which reacts with many metals and will most likely harm an HVAC system. Water would also require evaporators to be in a carefully controlled deep vacuum. Since this is highly impractical and inefficient, we rely on other refrigerants that don’t need the evaporator to be under such demanding conditions constantly.

This is all to say – moving heat can be a tricky business, but it’s one we are excited to tackle.